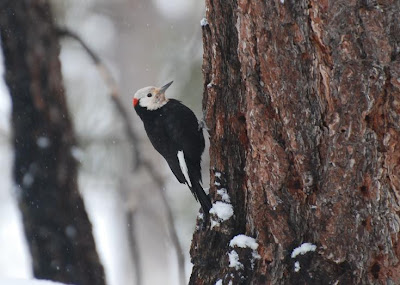 Introduction: My friend Alison Village, a fellow young birder from Michigan, visited California last week. Alison, her dad, and I spent all day Saturday birding the Carrizo Plain and environs in eastern San Luis Obispo and western Kern Counties. Our adventures were too numerous to recount, so I’m choosing my favorite part of the day—Mt. Pinos—to recall. Other charismatic birds we saw included Mountain Plover, Williamson’s Sapsucker, Yellow-billed Magpie, and Le Conte’s Thrasher.

Sleet. Having grown up in Michigan, I became familiar with this wonderful form of precipitation at a very young age. Nearly three years of Orange County weather has nearly erased the concept of sleet from my brain, along with snow (it looks pretty on those distant mountaintops), ice (that’s the stuff you put in your lemonade), and cold weather in general (it was pretty cold that one morning I went seawatching… maybe fifty degrees?) Yet here, at Apache Saddle in the San Emigdio Mountains, sleet was spitting against the windows of our rental car. 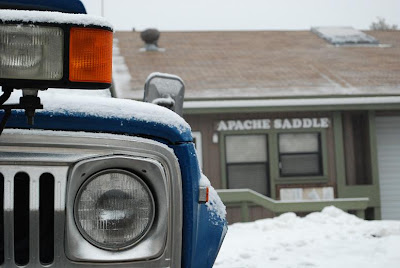 Taking a deep breath, I experimentally cracked open the car door. A sudden torrent of cold air rushed in to greet my face. Well, not cold. Pleasantly brisk. I bravely shoved the door farther open, attempting to extricate myself without tangling my feet and falling on my face in the muddy slush. The Chevrolet Malibu is not an ideal birding car; lack of legroom makes exiting the backseat an arduous task for anyone taller than a hobbit. Thankfully, about seven inches of growth in the last couple years have promoted me from hobbit status to average height. Everything, even height, comes with a price.

I finally exited the car with partial success, took a few steps through the coffee-colored, soggy snow, and stopped. Alison and her dad followed suit. Sleet pelted our faces and probed down my neck. Apart from the delicate sounds of the sleet against the pine boughs overhead, the forest was quieter than a birder listening to a rare bird alert phone tape. Several moments passed. I surveyed our surroundings—short, gnarled conifers, a scattering of oaks, and a weathered ranger station frosted with a thin layer of icy snow. “Not enough Jeffrey Pines for White-headed,” I muttered.

White-headed Woodpecker, a stunning woodpecker restricted to the high mountains of California, Oregon, and Washington, was Alison’s most-wanted bird in the mountains. The silence made me nervous. I blamed the winter. I had previously only birded California’s mountains in the summer, when the forests ring with birdsong. Some mountain birds—including White-headed Woodpeckers—are permanent residents, braving the winter’s snow and cold. We crunched through the snow, seeing nothing except a miserable flicker. As we retreated through the sleet back to the warm car, I couldn’t blame the birds for hunkering down.

The grass is always greener on the other side. As stale as this saying is, it nicely summarizes a birding phenomenon: the other place effect. Find yourself birding in a barren area? Betcha can’t stop thinking about other places and all the birds that might be there! Perhaps, we reasoned, the habitat was poor around Apache Saddle. Or, maybe birds just weren’t around there today. That’s how we ended up at Mill Portrero Park a few miles down the highway. The sleet slackened as we wandered the treacherous slush-covered paths, but birds remained scarce. In fact, the only birds around were a few raucous Steller’s Jays. Then, I heard it. “Tapping,” I breathed. Alison nodded. We surged forward, following the enticing tattoo through the forest. It got louder. As we approached a stand of Jeffrey Pines, a blur of black and white ducked behind a trunk, followed by a sharp peak call. Disappointed, we watched the Hairy Woodpecker for a few moments before continuing our search. The morning was still young; effortlessly finding our target would be boring.

“I like to work to find my birds,” Alison said cheerfully. I agreed equally cheerfully. Half an hour of poking around the bird-free campground, however, quelled our enthusiasm considerably. Once again, we strayed back to the car in defeat as the sleet phased into snow. Snowflakes dusted our shoulders and clung to our hair. Turning to converse with Alison, I noticed her ears and nose were the color of a male Vermilion Flycatcher. For the first time in nearly three years, my hands grew numb and stiff. I wished for warmer gloves. 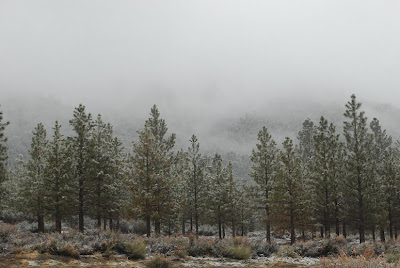 Our trusty Malibu carried us farther up the mountain. After conveniently ignoring a “CHAINS REQUIRED” sign, we pulled off the highway into another slushy parking lot. As usual, the snow-encrusted pines were silent except for the whisper of the gentle breeze. Crossing a small snowfield and gingerly descending a mud-choked trail, we finally encountered a few birds: a mixed party of Mountain Chickadees and Oak Titmice, along with a Western Scrub-Jay that seemed out-of-place in the snow. By this time, enough snow had accumulated that a snowball fight was inevitable. Hurling hunks of snow at each other was nearly as uplifting as a White-headed Woodpecker sighting would have been; by the time we returned to the car, we were damp and refreshed.

Higher and higher we climbed. More and more snow mounded alongside the road as we ascended. A few more silent stops, complete with a stiff breeze driving battalions of snowflakes into our faces, were sufficient to expel our newfound enthusiasm. With waning optimism, I instructed Mr. Village to stop at McGill Campground. As I wearily opened the door and carefully untangled my feet from the jaws of the passenger seat, I noticed the wind had ceased. Snowflakes still fell, but they drifted down casually, not in angry armies. The sun even broke through the rolling gray clouds. The hushed forest glistened. “Hey, it’s Narnia!” I shouted.

Gorgeous as it was, the forest was free of birds. The crusty snow, at least six inches deep, was almost strong enough to bear our weight. It didn’t, though, so with every step my ankles became intimately acquainted with the snow. We postholed our way through the campground, beheading an innocent snowman and occasionally lobbing snowballs at each other. Alison and I pressed on after Mr. Village returned to the car. Suddenly, the peeping of Pygmy Nuthatches shattered the silence. Turning to Alison, I announced, “That…is what we want.” Birds frequently travel in mixed flocks in the winter, so we eagerly slogged through the deep snow to search for different birds in the flock.

Tap-tap…taptaptap...tap-tap. Alison and I froze…figuratively, and almost literally. Barely daring to breathe, we edged forward, scrutinizing the pines for that tantalizing flash of black and white. “I see one,” Alison declared, only the slightest hint of excitement creeping into her voice. “Low—at the base of a pine,” she continued, anticipating my question. And—there! A stunning jet-black woodpecker with a white hood, small red patch on the nape, and a white streak on the primaries. “Got it—yessss…” I hissed. I floundered through the snow, thigh-deep on the slope, and fired away, surprised my wet camera still functioned. Captivated by this smart woodpecker, we forgot all the toils involved in finding it. We enjoyed it for several minutes before it flew. Satisfied, Alison and I tumbled down the snowy slope to the highway, whooping with excitement. While waiting for Mr. Village to find us, we celebrated with one final snowball fight. Back in the car, as we munched on snacks and stripped off soaked jackets, Alison remarked, “That was awesome.”

And you know what? She was right.
Posted by Neil Gilbert at 1:12 AM 2 comments: 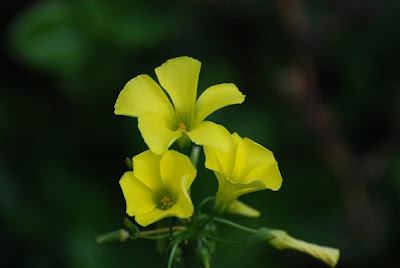 I've always been a birder--well, at least for a significant portion of my life. However, I have only begun down the road of being a naturalist the last few years. As a beginning birder, birds were all that mattered; I studied them fiercely, ignoring just about everything else. I looked in admiration at those who could name every plant, insect, or mammal that crossed their path, but my focus remained on birds. Then, I started to learn about butterflies...then dragonflies...and now plants and trees. I still fall well short of being an all-around naturalist--I only dabble in areas other than birds, and I am nearly ignorant in entire fields, including fish, reptiles, and amphibians. However, I'm learning. Slowly, but surely. With all the rain we've had recently, wildflowers have begun springing up in the few areas that haven't been ruined (i.e., "improved," which means paved over.) I've resolved to photograph and try to put names on them. The flower at the top of this post is Bermuda-Buttercup (Oxalis pes-caprae.) Native to Africa, my plant guide calls it "a ubiquitous and pesky weed." Still beautiful. 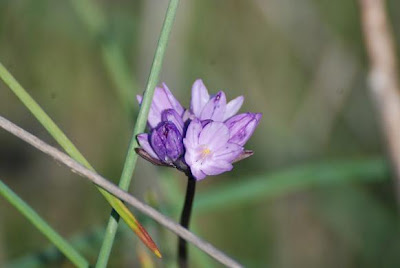 A very common and familiar (and native!) wildflower is Blue Dicks Dichelostemma capitatum. I found many blooming while tromping around the UCI preserve in Irvine with AlfGrimm. 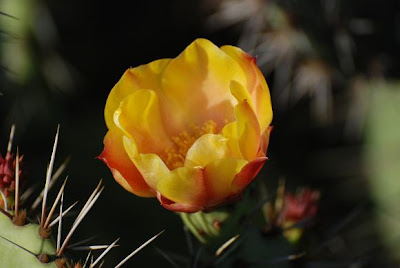 I bet you don't consider cacti wildflowers. Well, they do flower--and do so beautifully. This prickly-pear (exact species uncertain...I'll have to do more research) was also in the UCI preserve. 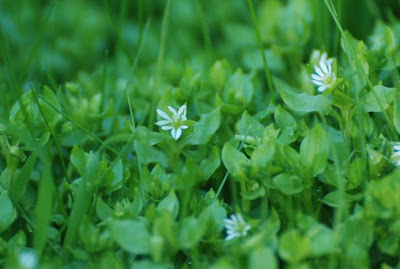 Not all wildflowers are large and showy; indeed, some are easy to miss! Such is it with the Common Chickweed (Stellaria media), another of those obnoxious nonnative species. The flowers are so small that I didn't even notice them until I crouched down to photograph a flock of juncos! Once I had spotted them, however, I found them everywhere. 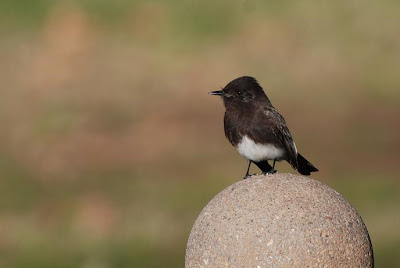 Lest you fear I've lost all interest in birds, here are a few shots of birds from Irvine Regional Park yesterday. Black Phoebes, ever common, but ever fun to watch... 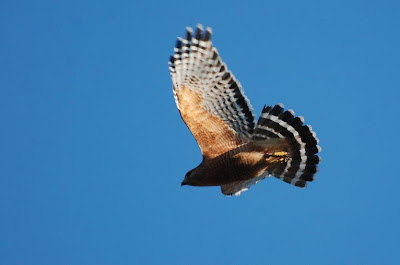 Red-shouldered Hawks, always loud, and winging by in a flash of black, white, and rufous... 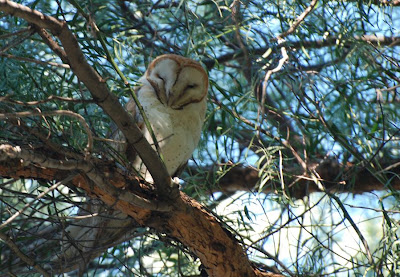 If you know where to look and are very observant, you might run into a roosting Barn Owl at Irvine Regional Park... 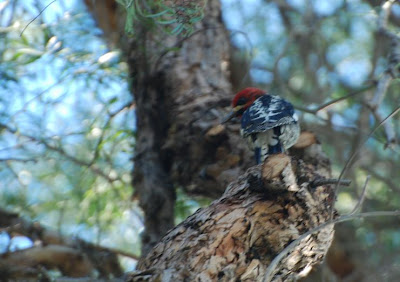 Red-breasted Sapsuckers, initially elusive, but then wonderfully easy to find once you learn where to look...

And Common Ravens, abundant and hard to miss, but always entertaining to observe. If I were doomed to watch only one kind of bird the rest of my life, I would choose Common Ravens. They are so intelligent and playful! Several days ago, I was watching one soaring overhead when it suddenly stalled and began spiraling to the ground in tight circles, croaking gleefully the entire time. Then in resumed soaring around...apparently the flight antics had been purely for fun.
Posted by Neil Gilbert at 11:07 PM 3 comments:

Oh, Don't Be a Skunk 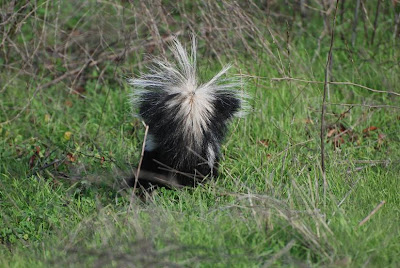 Do you like skunks? I didn't think so. They've earned a bad rap simply because of their fascinating defense tactic--spraying the enemy with that horrible scent. As a child, I was terrified of being sprayed by skunks, so I kept my distance. Since then, I've gotten over this fear of skunks. Skunks would really rather not spray at all, and they can only squirt out that delectable odor ten feet or so. 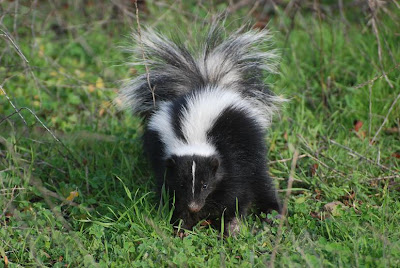 I was out for a spin around the Villa Park Flood Control Basin yesterday when I came across this Striped Skunk (Mephitis mephitis) nosing around a grassy area. Skunks are generally nocturnal, so seeing one out in the middle of the afternoon was about the last thing I was expecting. After watching him for a few minutes, I developed a hypothesis as to why he was out foraging in the afternoon. One of his back legs was injured, making walking difficult. The injury surely hampered his foraging ability, which forced him to be out during the day. 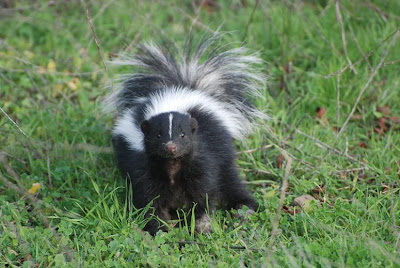 The skunk was surprisingly confiding; he barely glanced up at me as I photographed him from about ten feet away. After several minutes, he trundled off into the brush. I couldn't help but snicker at my old fear of skunks--they aren't the bloodthirsty, spray-happy villains I thought they were. I propose that February fourth be named National Hug a Skunk Day. Wonder how quickly that will catch on.
Posted by Neil Gilbert at 8:24 PM 2 comments: