A day without a camera: the journal

An error message flashes. No memory card! And so my camera is debilitated by the absence of a plastic square weighing a gram. Instantly I mourn. Today will go unrecorded, be forgotten.

But no! I will photograph with ink instead of JPEG. I must see through my cornea instead of my camera. It is harder.

I follow the throaty din of chorus frogs, expecting to find a secluded vernal pool. Instead I stumble across a roadside ditch containing one bathtub’s worth of water. The surface is iridescent with oil. But the frogs are here, dozens. I squat. They stop. I gaze at their projecting snouts, at their smallness. At their disregard for the oily water. Then I rise, and the frogs splash.

I sit reading in a forest of trees younger than my parents. Nothing stirs in the midday sun except a Hairy Woodpecker dissecting an ash. I stare at the page. Paper. Wood. Trees. These trees around me would have been saplings when my parents were students at Wooster. Woodcock habitat. This copse was woodcock habitat half a century ago. They would have twittered and tumbled overhead at dusk.

Some of these trees are my age. Neither a sapling nor a tree.

A Lapland Longspur rattles over. Ten minutes later, a pipit. It pays to sit outside.

If you are concerned about the proliferation of trash, then by all means start an organization in your community to do something about it. But before—and while—you organize, pick up some cans and bottles yourself. Wendell Berry, “Think Little”

My campaign of the day is to improve earth by picking up bottles. With fresh eyes I find them everywhere—Budweisers emerging from the leaf litter, a massive whisky bottle jammed in a low crotch. My latest addition is a Gatorade bottle—Glacier Cherry—cast away beside the trail, a testament to some hiker’s clumsiness.

A woodpecker that could be a flag alights on a nearby snag. It is, I realize, the most beautiful thing I have seen. It is perpetually wounded, chronically bleeding crimson from the head.

Ice shatters. Startled, I prematurely abort my woodpecker musings and seek the cause. Nothing. I gaze at the reservoir. Then, a partially submerged tree—younger than me—shudders. Ice snaps from its lower branches. It is not the breeze. I watch, but all falls still. A beaver? An angry catfish the size of a beaver? I do not know.

A young man rushes by on a yellow mountain bike, his calves mud-splattered. He is younger than me, and that says a lot; I am young. I wonder why he is here. Is he lonely, wishing that a buddy or lady friend could accompany him? Or is he reveling in the solitude, escaping the chaos of high school (college?) And, as I follow his tire tread in the dirt, I wonder if he is wondering about me.

I walk briskly, trying to maintain a healthy distance from Backpack Man, a hiker behind me on the trail. I have nothing against him; I simply want to be alone. He appears to be roughly my parents’ age. He hauls a massive tan backpack, military looking. I wonder what it contains. Camping equipment? Camera gear? I try not to step on the bike tracks left in the clay-colored mud by the young man.

Fast footfalls approach. I look up to see a trail runner, older than me, but not by much. His short career has already been successful (engineer?) I decide that he has a serious girlfriend—but, she’s out of town (visiting her parents?) Otherwise, she would be here.

This forest, this trail—empty, a stage for solitude, but full, full of people and their stories.

I reach the road. A large coffee cup—McCafe, 24 ounces—lies flattened beside the pavement. I stoop to collect it (even though it isn’t a bottle). Another runner passes me. I feel guilty but immediately scold myself—come now, you don’t need to run every day. And anyway, I’m walking. Miles. But, sluggish miles punctuated by frequent writing stops—my pulse probably has not exceeded one hundred beats per minute. In the ditch I spot a sodden car mat advertising BEECHMONT FORD. It also is not a bottle, but I pick it up anyway.

My car is intact. The only other soul in the lot is a man (slightly younger than my parents, I judge) and his bedraggled dog that is at least part border collie. The man has had a hard life. I force myself to scope the lake, thinking that the heat distortion will have abated. It is worse; the ducks are just as unidentifiable as before. A large truck—an aggressive, growling truck—pulls up behind me. A voice speaks, surely addressing me, as I am the only proximate person. I turn and see two rangers. I cannot hear over the engine. I walk to the window. The younger ranger—the one in the passenger seat, asks, “That guy have his pants down earlier?” I swear those are his exact words. I hesitate; the passenger ranger laughs, realizing the absurdity of his question. The driver says nothing, shows nothing. I say what I know, which is nothing, and they thank me and leave. The man and the dog leave shortly thereafter. I notice he drives a purple Ford pickup. Perhaps the mat that is now in my trunk was once his.

I sit on the cool concrete in the shadow of my car, writing about the rangers and the man with his pants possibly down. A Ford Focus pulls up next to me, driven by a young woman in a baseball cap and aviators. Not looking up, I hear her exit the car and walk away. Perhaps the mat that is now in my trunk was once hers. I imagine running up to her with the mat and asking, “Excuse me, did you lose this?” I imagine becoming her friend and falling in love. I see hikes in the woods, long coffee dates on rainy days.

People drive slowly, windows down, listening to frogs. At least I hope so.

Vultures and crows overhead
both black birds
but neither blackbirds.

I am on a new trail, the Cedar Pond trail, and I have reached what is presumably Cedar Pond, a small, murky pond without frogs. The trail is neglected, overgrown. I sit in the damp leaves and admire the stunted canopy of Lycopodium. Without thinking, I begin pishing and am surprised to realize that it is the first pishing incident of the day. Two chickadees—seeking real estate, I speculate—wander over, scold half-heartedly, and then resume their house hunt.

A butterfly erupts from the trail. I see a flash of orange. An anglewing! It alights on a wizened stump, and, as it fans its wings, I glimpse the silver crescent on its underwing. Not a Question Mark. But there are multiple commas. I wished for my camera. I wished I could memorize the markings and sketch them like a laser printer. I knew I could not, so instead I admired the terra cotta wings splotched with molasses. I tried to accept not learning its first name. Comma sp. it remains.

I sit in my car, contemplating my next move, staring out at the young forest, maple dominated. Probably Reds, judging by the low ground. I try to imagine my parents as trees. And how trees would be as parents. If John and Carol Gilbert were trees, I suppose I would be as well. What sort of tree would I like to be? Perhaps a sycamore—a slim, stately sycamore guarding the lip of a ravine, roots penetrating ancient shale. Yellow-throated Warblers will sing from my crown. As I age and hollow out, raccoons and Barred Owls will make their homes in my heart.

Sit in the forest long enough, quietly enough, and you will hear the leaf litter breathe. I am not joking. That carpet of decomposition is alive. Fallen leaves rustle without the lightest breeze. Wolf spiders dashing after prey, perhaps. Or salamanders or sowbugs or Wood Frogs shifting in their hiding spots. Or—perhaps it is the sound of plants growing, of shoots pushing through last year’s death. Or maybe it is causeless…
Posted by Neil Gilbert at 11:13 PM 1 comment: 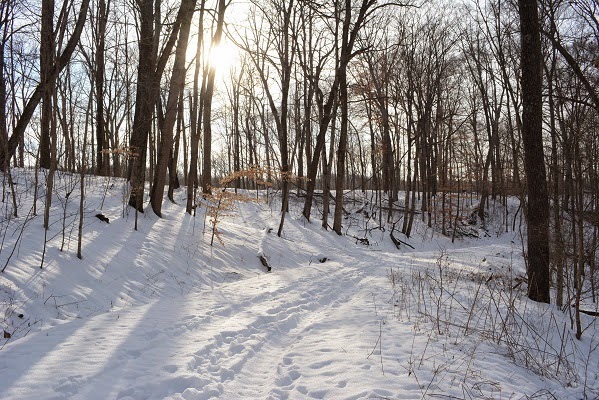 Spring is official. It has been unofficially arriving over the last few weeks--and, arguably, the last few months. The Northern Rough-winged Swallows I saw in California in late December were likely northbound migrants. And here in Cincinnati, the maple sap has been running since the middle of January. But, now that spring is undeniably here with peenting woodcocks, blooming wildflowers, and nesting woodpeckers, it is a good time to reflect on winter. I will do so with photos. 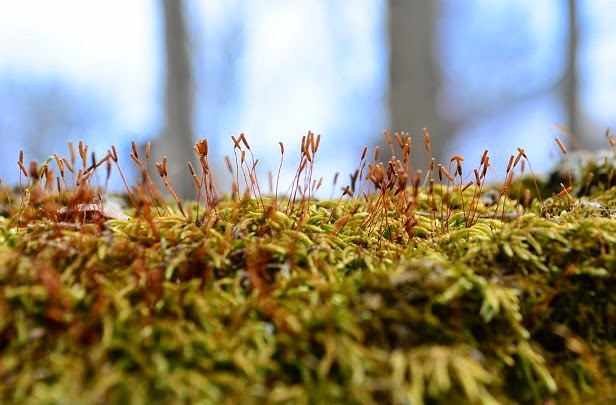 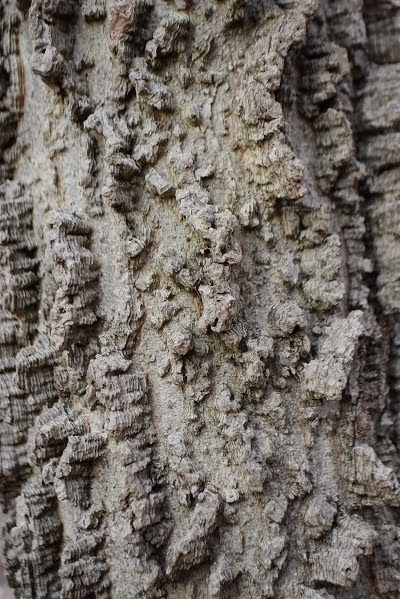 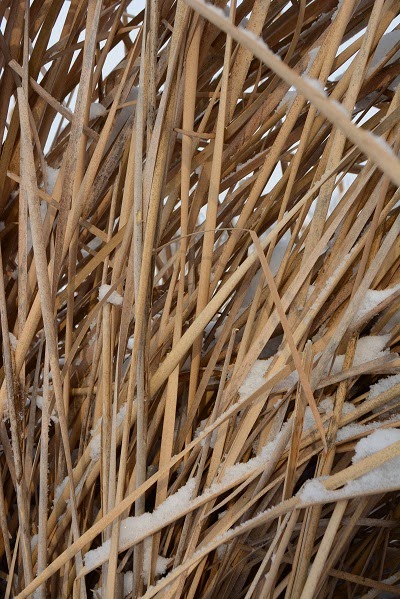 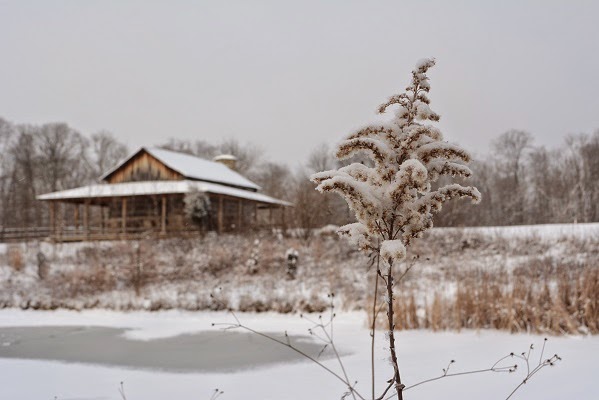 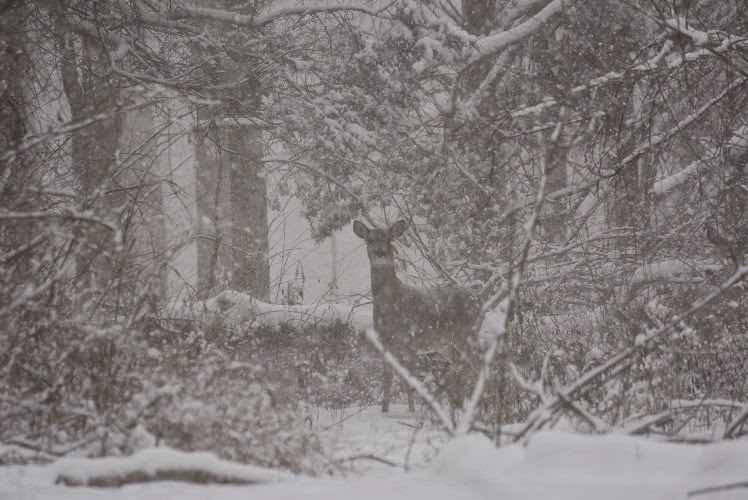 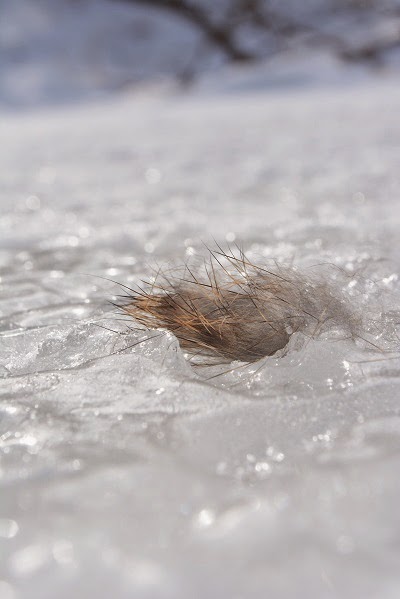 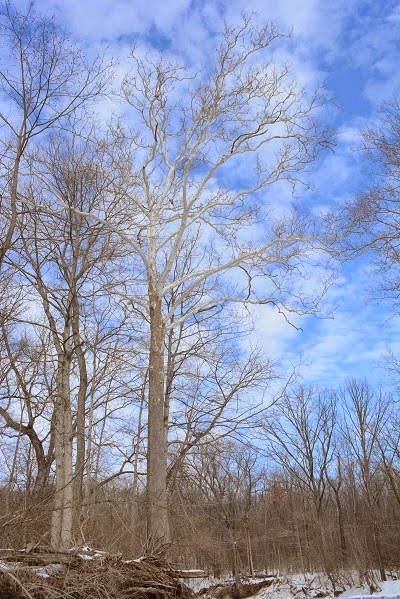 The White Tree of Gondor 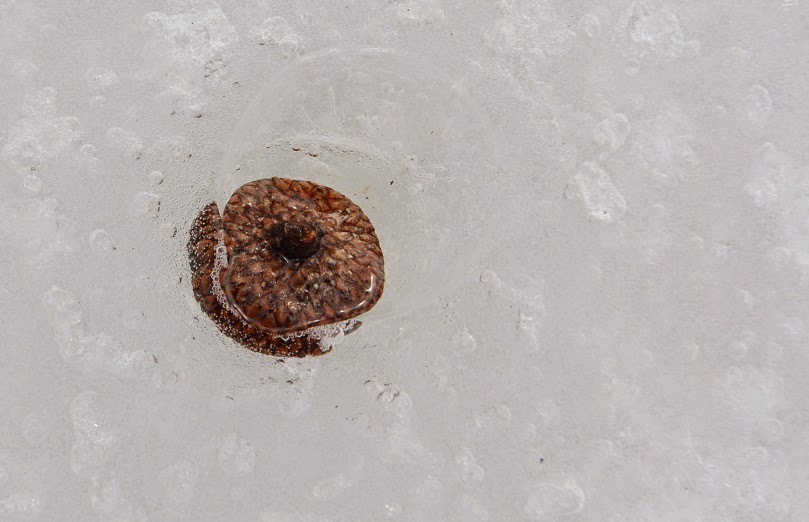 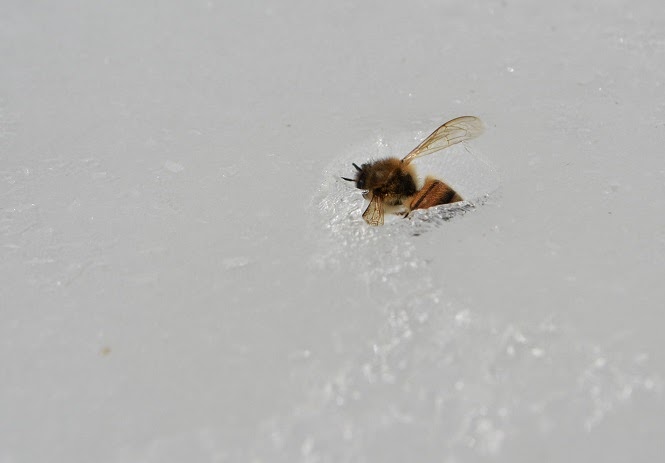 This is what I look like when I wake up in the morning. 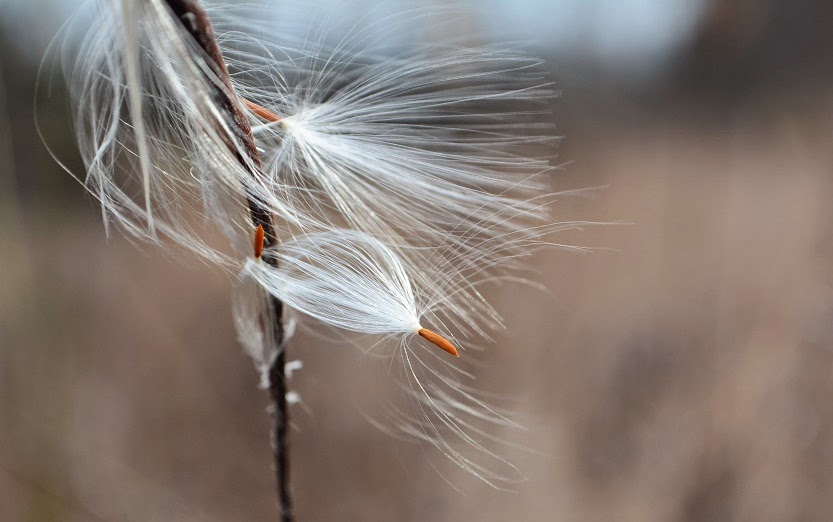 Posted by Neil Gilbert at 10:13 PM No comments: 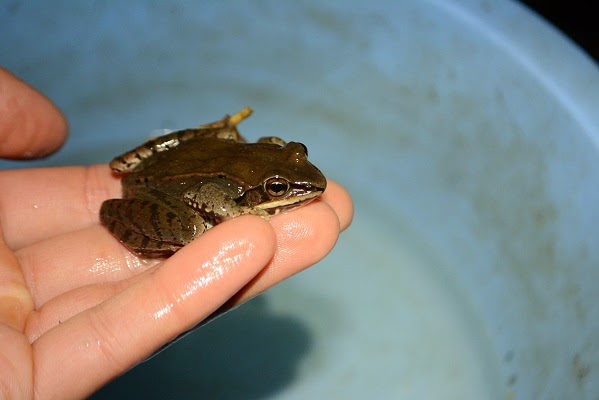 Late last night, returning from a jam session with my friend Alex, I saw frogs like popcorn on the rainy roads. I even saw (and narrowly avoided squishing) a salamander army-crawling across the nature center driveway. And so I decided to go for a midnight amphibian hunt even though I craved sleep.

Such nights are ideal for finding frogs and salamanders. Amphibian movements are dictated by rain--their skin must remain moist, and some individuals traverse hundreds of meters of high ground to reach their breeding pools. Moving at night presumably ameliorates desiccation and lends security from predators.

They covet vernal pools, those ephemeral puddles that will dry by July. These temporary ponds cannot house fish and other aquatic predators, creating a safe nursery for amphibians. But, the amphibians can't waste their time--the pools will dry, and if the larvae cannot mature, they perish. Starting in late February and early March, the salamanders stage a sluggish exodus from their subterranean hovels to their ice-rimmed breeding pools.

As I hiked through the persistent rain, I imagined seething masses of salamanders and cautiously planted each step to avoid pancaking any migrating amphibians. The scene at the first pool I visited was much less exciting than I had imagined--a few chilled Wood Frogs floated around, but nothing else. I had to search for ten minutes until I found my first Jefferson Salamander. 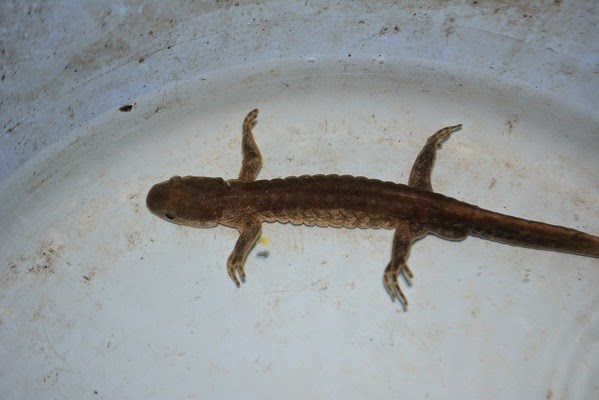 I moved on to a second pool. This one throbbed with frog activity. I could hear the Spring Peepers from a quarter-mile away, and as I drew close, I could Wood Frogs gurgling the base line to the frog cacophony. The frogs, chilled and hormone-charged, were easy to catch. 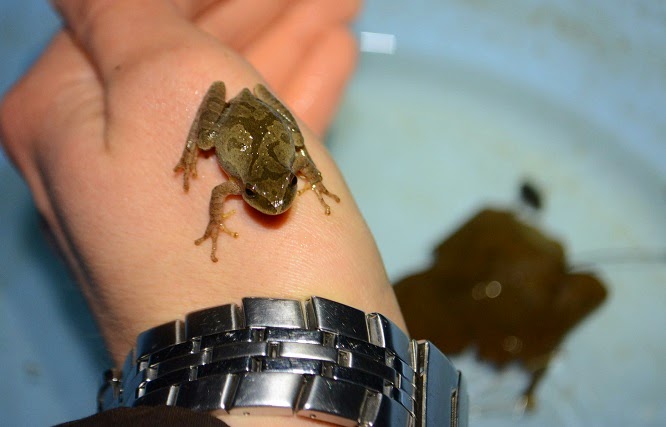 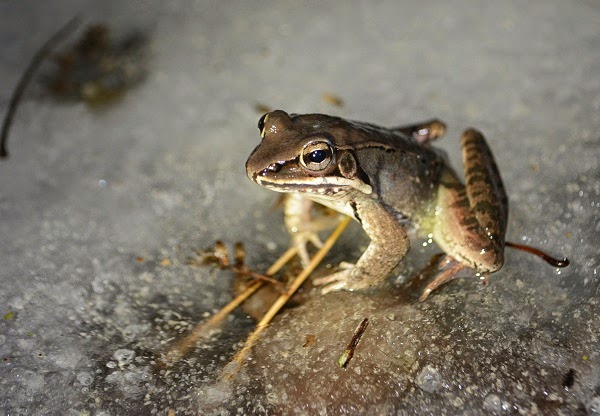 Wood Frog (Lithobates sylvaticus). Crawling onto a sheet of ice isn't such a great decision when you are a poikilotherm!

No salamanders. I probed the shallow water with the beam of my headlamp, but the hunt was fruitless. Finally, out of desperation, I cast my net into the pool and dredged a three-foot section of the pool's bottom. To my astonishment, the net came up with a Spotted Salamander! I couldn't duplicate this feat despite casting the net a dozen more times. 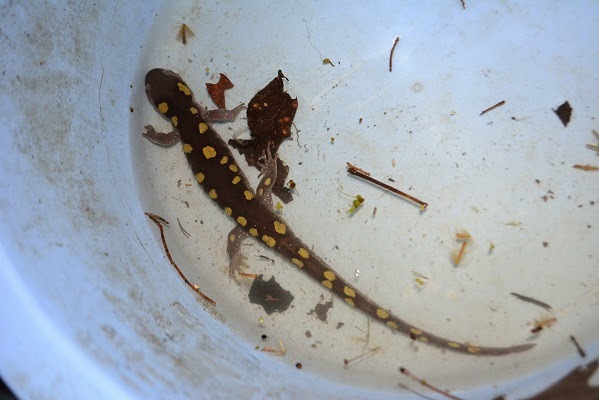 And finally, this evening, while seeking woodcocks at Shor Park, I came across this fearsome salamander that I cannot identify
. 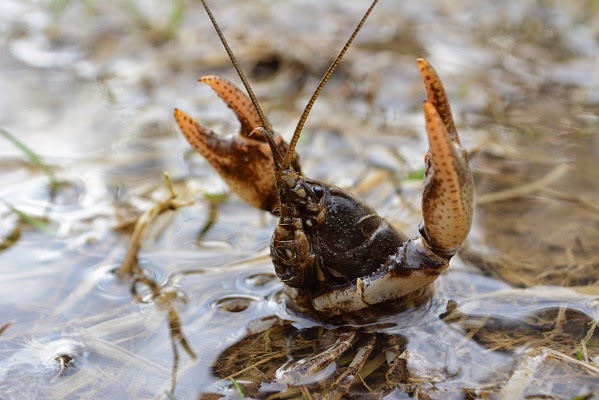 Just kidding--it's a crayfish, of course. I decided to overcome my deep-seated fear of crustaceans and picked it up. I didn't even get pinched! I can highly recommend the experience. Don't be afraid. 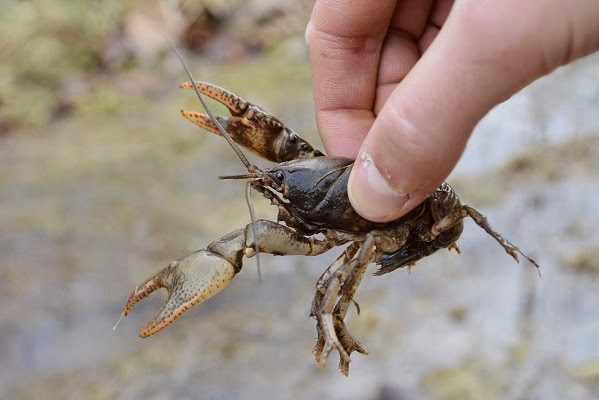 Posted by Neil Gilbert at 10:50 PM No comments: