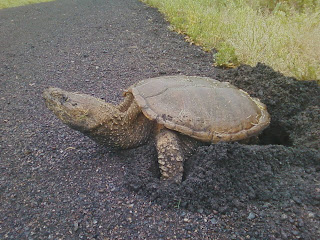 Looks like she just crawled out of a swamp, I couldn’t help but think.

Closer inspection corroborated my initial reaction; the girl on the gravel roadside was a Snapping Turtle. Entombed to her armpits in loose soil and gravel, she wearily rotated that grotesque neck and fixed me with a gaze of contempt. Fearful of the powerful jaw and not wishing to disturb her homemaking, I crouched several feet away, and she resolutely returned to filling in her nest hole with her powerful hind legs. Swipe! Each rake of those sharp curved claws sent a cascade of gravel into the nest hole.

Snappers seem more appropriately classified as junior dinosaurs or proto-dragons than relatives to the cute, quaint Painted and Box Turtles. The long, spiked tail and the jagged rear marginal scutes are the strongest suggestions of this hypothetical relation. Every time I wade in lakes, my brain must dismiss my recurring fear of stepping on one of these hideous monsters.

The growl of a pickup interrupted my reptilian meditations. It was one of those white Penn State physical plant trucks, the abundant acronyms emblazoned on its flanks lending it an air of jurisdiction. The truck jolted to a stop behind me; two guys popped out, both the sort you might expect to be roaming a state game area in central Pennsylvania—stocky, clad in sturdy boots and jeans, and chewing tobacco.

“Howday!” hailed the lead guy, his rural Pennsylvanian twang confirming my suspicions of his origins.

I returned his greeting by jerking my chin at the half submerged turtle and saying, “Big ‘un, isn’t she?”

“Yuppp,” he said, unclipping a grimy measuring tape from his belt. He fixed it behind the turtle’s head, stretched it back, and hollered, “Twelve and a half!” His stoic companion nodded in response.

He prodded her with the measuring tape. “Found seven of ‘em yesterday, ‘long the road. Coons already got one of the nests” Leaning over, he spat a brown jet over the snapper’s carapace and lifted up her tail. “Looks like she’s all done…c’mon, lemme help ya out.” He hauled her out of the hole and kicked it full of gravel and dirt.

“Yuppp…been awhile, but the meat’s white and tender.” The snapper, oblivious to the assistance, continued to gouge scrapes in the road. The fellow presented her with the tip of the measuring tape, but the turtle only glared at it.

“She’s taired, mighty taired—prolly walked all night,” the silent companion piped up, his first contribution to the conversation.

“Yup—think I’ll give ‘er a ride back to the pond,” returned the first guy. He gingerly grabbed the snapper’s tail and hoisted her into the truck bed. “Weaaall, good talkin’ to you, we gotta turtle to deliver!” They climbed into their truck, executed a neat three-point turn, and rumbled off in the direction of the pond a half-mile distant.

As the truck climbed a hill, I could see the snapper sprawled in the bed. Smiling at the comical sight, I stamped the dirt over the nest more firmly and pondered the turtle’s feelings. Was she appreciative of the help? Did the indignity enrage her? Or is any such emotional analysis inappropriate, the turtle brain being purely instinctive and immune to emotion, a tabula rasa?

Whether or not turtles are capable of appreciating roadside assistance, next time you encounter an errant snapper, move her out of the road, but mind the claws and jaws!
Posted by Neil Gilbert at 2:52 PM No comments: