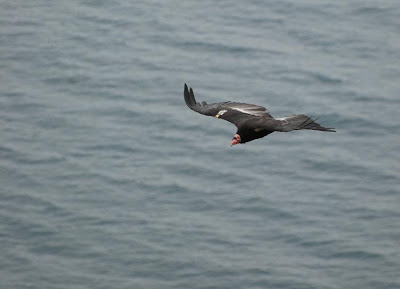 I didn't know what I was getting myself into. When I called my buddy Tim a couple days prior to our already spontaneous roadtrip, I was expecting that we'd just maraud around the southern Sierra Nevada as we did last time. Tim, however, had other ideas.

"Big Sur? Sure!" I replied, only vaguely aware that Big Sur is a five-hour drive from Weldon (which, in turn, is over three hours from my house.)

You get the idea. It was a fabulous trip. The condors, however, were the pinnacle of the expedition (well, except maybe for that pizza.)

The road through Big Sur is treacherous. In addition to the numerous bikers, backpackers, and the occasional Segway you have to avoid, the highway is more twisted and bent than a yoga extraordinaire. Around one rather ordinary-looking curve we swung, and WHAM--a California Condor was circling a mere hundred feet over the road. My brain was too flabbergasted to fully analyze the situation, so I simply began bellowing to attract Tim's attention. I hastily (and perhaps just a wee bit recklessly) swerved off the road to a dirt pulloff, and we scuttled from the car faster than mice being pelted with hats. 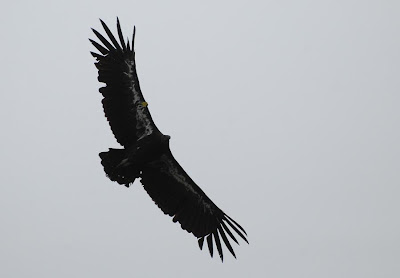 Whooping with delight, we watched the gargantuan bird lazily soared just overhead. Those long wings, the splayed primaries, the pathetically short tail, the gray head (it was an immature)...we soaked in every detail. Eventually, the beast began drifting south, so we hopped into the Subaru (our starship of choice) and pursued it along the coastline.

This time it was Tim who started shouting. "MORE!" he screamed, wildly gesturing at a fog-shrouded hillside. The condor had been joined by four more. They spiraled in a captivating wheel, shimmering in and out of the fog until they were mere specters. Tim described it as the best moment of his life. I'm not sure I agree...but it was pretty darn awesome.
Posted by Neil Gilbert at 8:18 PM 3 comments: 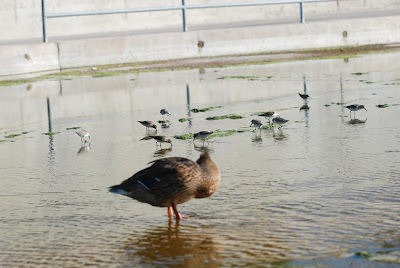 Pumping my legs furiously, I crest the hill. Underpasses are short but steep; my quads tingle as I crank into higher gear and lazily peddle onward. Wiping the sweat from my forehead, I lean back and stop peddling, allowing momentum to carry the bike forward. I lift up my jersey to feel the cool breeze on my bare chest. Ahhhh—it’s a perfect summer morning: warm, but not uncomfortably so, the sun already high in a completely clear sky.

It would be beautiful, except for the setting.

I glance to my right and behold the mighty San Diego Creek. Creek is a misnomer; it is a large concrete ditch with a trickle of trash (and maybe a bit of water) fermenting in the bottom. Plastic bottles, shopping carts, and algae mats top the menu. The only sign of life is a band of ragged Mallards sifting through the goo. Two dead ones fester in a puddle nearby. I pause and stare at the puddle. I can’t decide whether it’s green or black.

Not only is it an eyesore; this lovely stew smells exactly the way you would imagine it to.

I’ve become accustomed to the sight, smell, and taste of the creek. In fact, I’ve embraced it as a worthy birding spot. Hooded Mergansers often winter in this particular puddle, and migrant shorebirds sometimes stop on the radioactive heaps of slime.

Shorebirds! It’s July, a supposedly boring time of year to go birding. The breeders have been around long enough to become wearisome, and nothing is migrating. Well…not actually. Shorebirds begin sneaking south by mid-June, and by early July the beaches and mudflats swarm with them. They’re not pristine juveniles; the worn adults dominate the scene until mid-August. Still, I enjoy sorting through the battered adults. Each one is unique. This Willet has replaced most of the feathers on the breast, and that one has retained extensive barring…

My ponderings are broken when a tiny sandpiper bursts from a pool of sludge. Breeep? It asks as it careens down the creek. Least Sandpiper! As I watch it disappear down the channel, I try to imagine it on the tundra. Boasting crisp alternate plumage, perhaps it strutted beside an ice-choked pond in hopes of attracting the perfect female. Perhaps it frantically scolded and fluttered by its nest, attemping to distract a lumbering caribou, or polar bear, or shorebird researcher…

But now it’s puttering around a pathetic ditch in the heart of Orange County.

It’s summer. It’s shorebird season.
Posted by Neil Gilbert at 1:11 AM No comments:

Colorado Is for the Chickens I never warned you.

Colorado. A wonderful place. For nearly three weeks I ravaged the state, destroying target birds right and left. The first ten days I stayed with Marcel Such and his family in Lyons (thanks, guys, for putting up with me for that long!) and the last seven days were devoted to Camp Colorado (thanks, Sea and Sage Audubon and American Birding Association for the scholarships!)

Naturally, all this birding and marauding created heaps of stories.

Ask me to tell you one next time I see you, because I don't have time right now!

That's because I'm embarking on another road trip with my friend Tim tomorrow. The day after I return, I begin volunteering at nature day camps for kids for the next two weeks. After that, I have a week-long college orientation trip...

You get the idea. I'll probably never get around to writing a full report for the trip. Oh well. In the meantime, enjoy these two miniature stories. The first is about the ptarmigan (photo at top.) These dapper little chickens are legendary among birders. They're tough to find--supposedly. Marcel, his brother Joel, and I had no trouble finding several of these quizzical chickens quarreling on the tundra up by Trail Ridge Road in Rocky National Park. The birds ignored us as they chased each other around, and at one point one of them almost landed on my boot. Perhaps even more miraculous was our run-in with this Dusky Grouse. They're possible just about anywhere--and supposedly, you'll encounter one if you hike around enough in their habitat. Well, we hiked for a week in the mountains with no luck--until we came across this gorgeous displaying male. Joel and I plunged into the dark, mosquito-infested forest and stalked it as it displayed in the shadows. It largely ignored us. Have you ever had a Dusky Grouse stroll within two feet of you as you kneel amid sweet pine needles?

It's one of those things that you just have to experience for yourself. If you have, great. If you haven't? Too bad.

More later. So long, and thanks for the orange juice.
Posted by Neil Gilbert at 11:23 PM 1 comment: