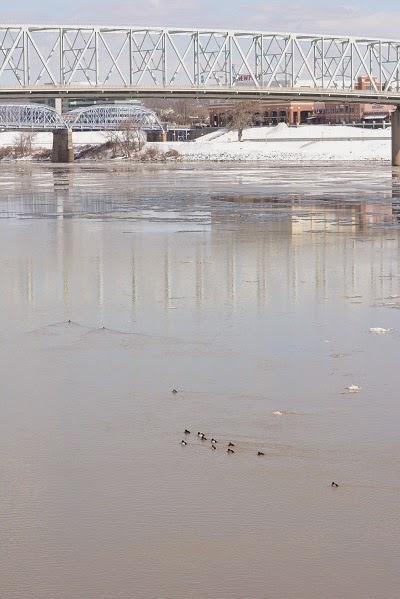 Open water is a critical ingredient in winter birding; without it, your birding repertoire will be limited to a few dozen passerines. The recent deep freeze has concentrated waterfowl in the ice-jammed Ohio River. I took a cruise along the river this afternoon and found decent numbers of ducks (a flock of over a hundred Canvasbacks was a clear highlight) to reward my numbed toes.

The only birds close enough to photograph was a small pod of scaup near downtown Cincinnati. Greater Scaup were more numerous today, but I did see two Lessers. One of them is in the photo below. Can you find it? 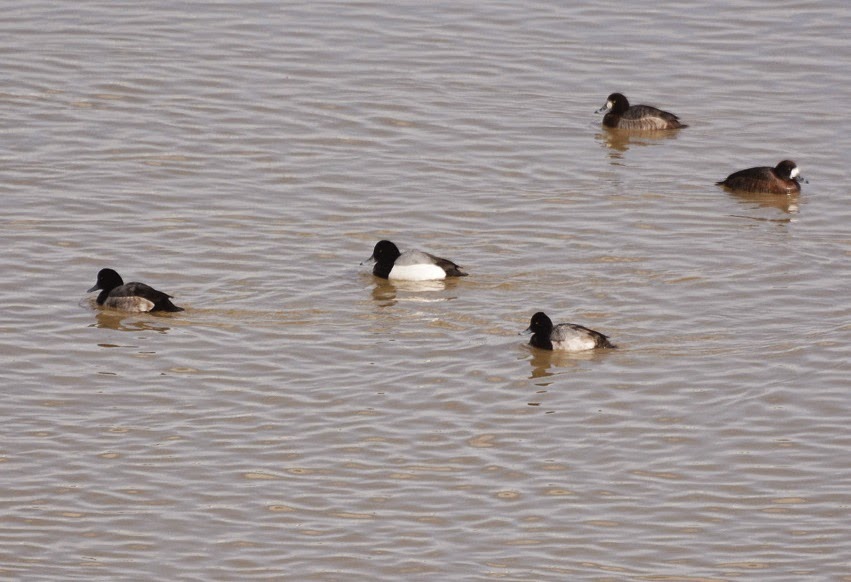 The two scaups are so similar that I'm sure many novice birders have smashed their binoculars in frustration. At close range, the fine differences are easier to notice. In the top photo, the Lesser is leading the pack; below, it is the topmost bird. 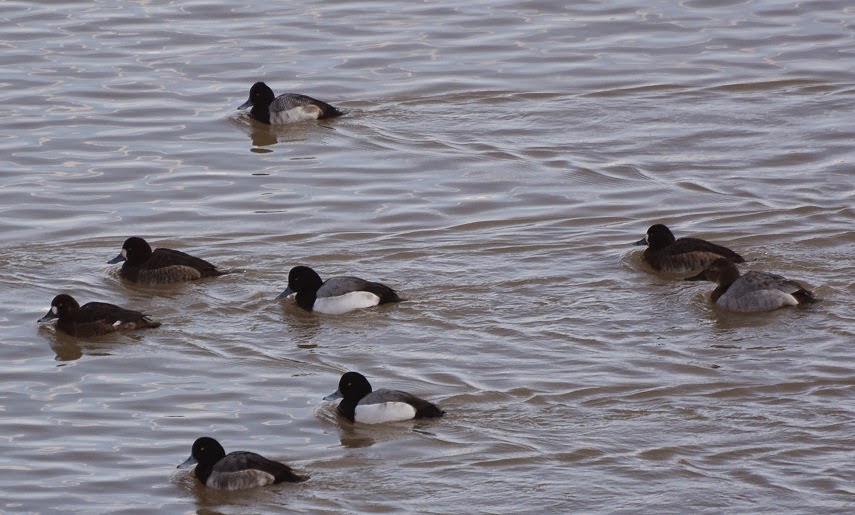 I became curious about scaup distribution--thank goodness for eBird! As I drove along, all I could remember was that Greater Scaup occurs in both the Nearctic and the Palearctic, while the Lesser lives only in North America. These maps are for winter (December through February). 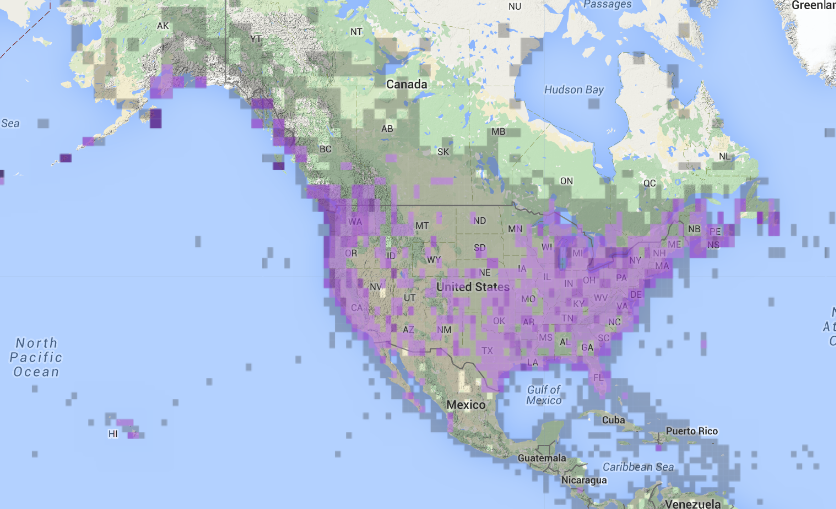 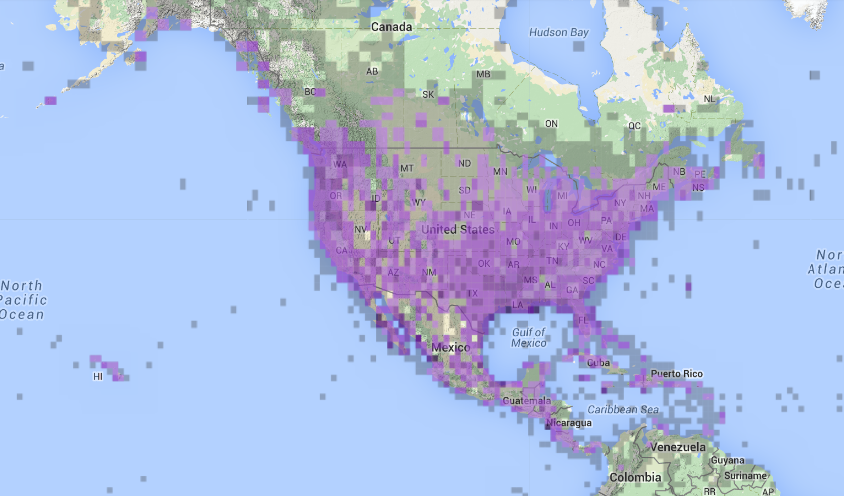 And the Lesser Scaup. It ranges farther south and is spread more evenly across the continent.

After completing my river circuit, I made a detour on the way home to check the lake at East Fork State Park. This is a massive lake; I had a hunch there might be some open water. There was--just one small patch that was peppered with Mallards, mergansers (all three species), and goldeneye. They appeared unnerved by the pair of Bald Eagles standing vigil nearby. 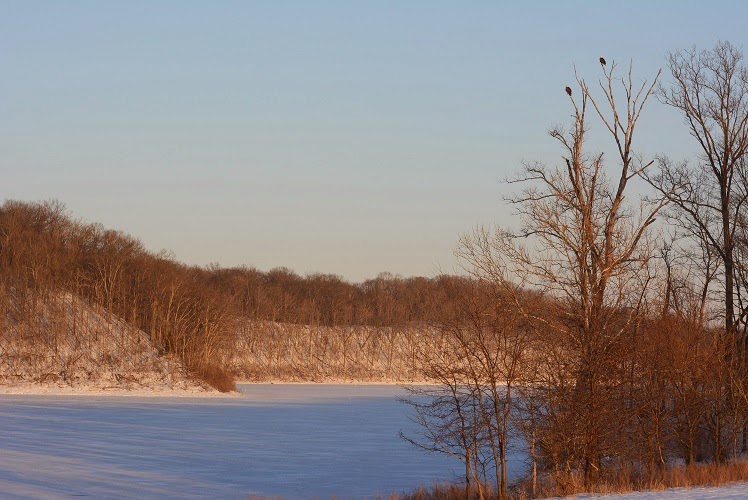 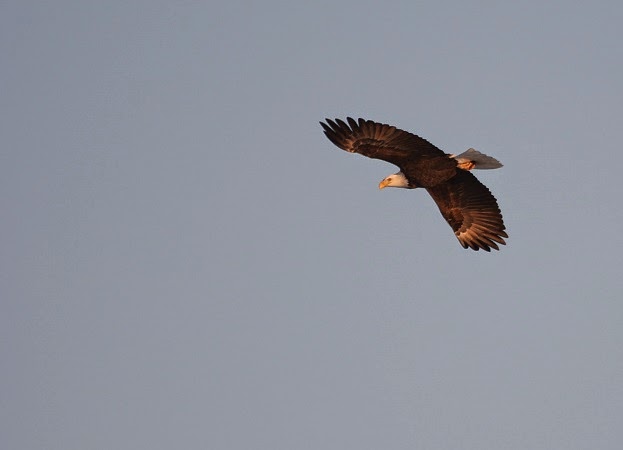 Bald Eagles are certainly majestic, but after hearing several dozen breathless accounts from nonbirders about that time back in '87 when we saw an EAGLE at the cabin, they can become annoying.  I'm sure these eagles are enjoying the deep freeze as much as I am--it makes hunting duck easier, a welcomed supplement to a diet of roadkill and dead fish. With temperatures predicted to rise next week, the eagles will have to go back to their carrion and I to my chickadees and White-throated Sparrows.
Posted by Neil Gilbert at 9:20 PM No comments: 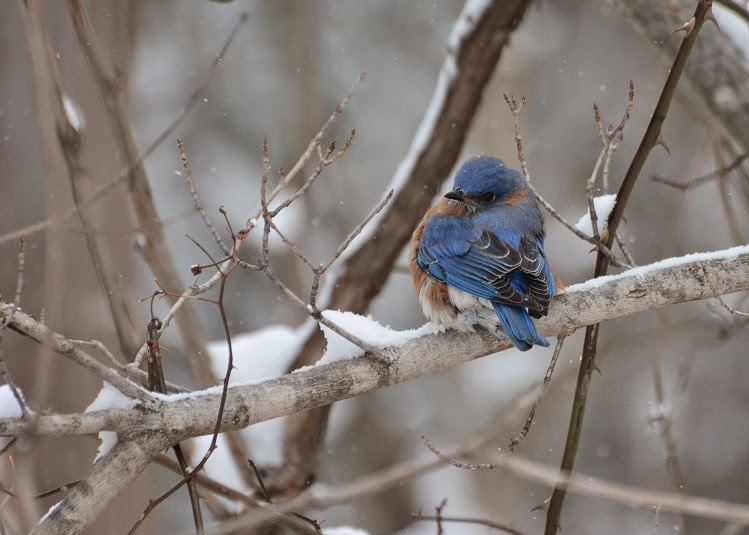 Allow me to give you a brief history of this podium for avian bombast.

In 2007, a nerdy fourteen year-old young birder created this site and began to write earnest chronicles of his local birding adventures. He named it “OCBirding,” short for “Orange County Birding.”

By 2009-2010, the blog had garnered something of a following and displayed increasing levels of grandiloquence.

In 2010, the author moved out of Orange County, rendering the title obsolescent.

It wasn’t until about 2012ish that the author finally realized that “OCBirding” was no longer an appropriate title. The lackadaisical author slapped the new name, “Not just birds,” onto the blog with barely five minute’s thought and returned to homework.

Now, in 2015, emancipation from school allows me ample time to fret over my blog. The insipid title offends me. So, after a full day’s contemplation, I hereby rechristen this blog “Obsessive-Compulsive Birding.”

There are lots of potential names out there. The Avian Confessions of an Ex-Nerd. Birding in Lotsa Places. Ornithological Warfare. Eat, Pray, Bird. You get the idea. I chose thus because:

1. Back in the OCBirding days, people jokingly joked that the “OC” stood for “Obsessive-Compulsive.” Take that.

2. The web address of this blog is ocbirding.blogspot.com, and I’ll be damned if there isn’t a better OC title than “Obsessive-Compulsive.” Hmm. Ornithological Crap?

3. I’m think I renamed the blog “Obsessive-Compulsive Birding” back in my college days. I’m just not sure. That’s why it’s not in the history.

4. Finally, my patterns of birding behavior are arguable obsessive-compulsive. I think about birds constantly and go birding all the time. And when I’m not birding, I’m worrying about the birds I’m not seeing. I’m not sure why.
Posted by Neil Gilbert at 8:55 PM 1 comment: 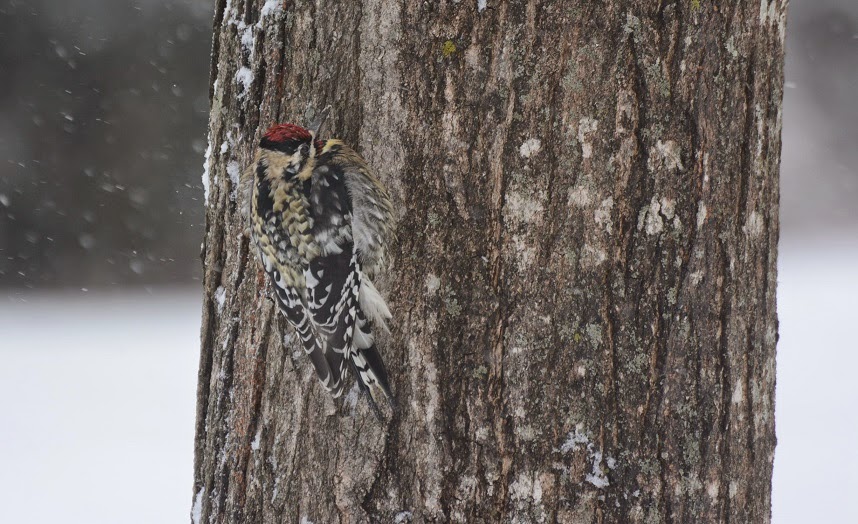 Cincinnati has neither the snow-removal infrastructure nor the cold tolerance of more northerly cities. Moderate snowfall that would be met with a shrug in Grand Rapids paralyzes this city. As a result, I had two snow days from work last week. But, I can’t complain—I used that time to bird. (Don’t even ask me how many hours I wasted poking my head into the bellies of Red Cedars looking for Saw-whet Owls.)

On Wednesday morning, I stumbled across a Yellow-bellied Sapsucker working a sugar maple. It looked miserable, as it should have—temperatures were barely breaking the positives. No sap would weep from its wells today. 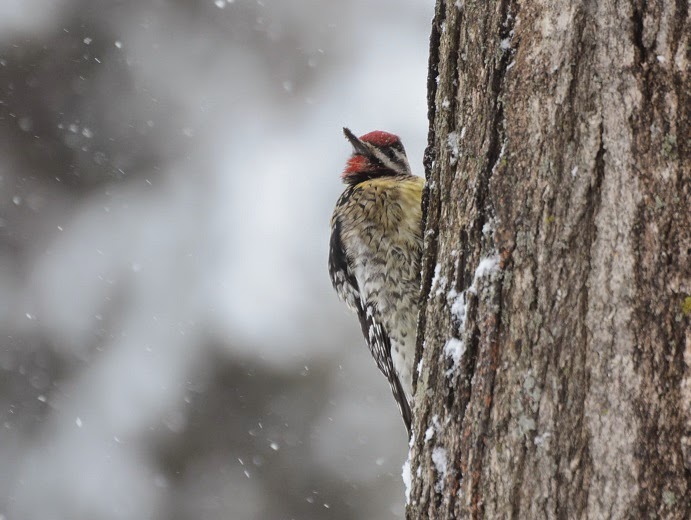 Sapsuckers are a hot topic at the nature center this time of year. We regale the visiting children with the importance of the quasi-mythical woodpecker called a sapsucker. We showcase old wells and explain that other species will steal from the sapsucker’s property. However, I was taken aback when my supervisor referred to sapsuckers as a keystone species. Really? I wondered. I bet if all the sapsuckers disappeared from these woods, business would be unchanged…

Fact: other species plunder sapsucker wells. I’ve caught Yellow-rumped Warblers in the act. But, I would contend that, at least in the sapsucker’s winter range*, other species don’t glean a significant percentage of their daily caloric intake from sapsucker wells**.  And, here in Cincinnati, I don’t think winter sapsuckers are abundant enough to support significant populations of, say, Ruby-crowned Kinglets…

I realized that my hang-up might be semantic. I launched an archaeological dig to unearth my biology textbook, which I have admittedly used more often as a dumbbell than a vehicle of scholarship. Page 1073 defines a keystone species as an organism that “has a much greater impact on the distribution and abundance of the surrounding species than its abundance and total biomass would suggest.”

A brief search on Google Scholar confirmed my suspicions—I found multiple articles questioning the usefulness of the term, including one that read, “The term keystone species is poorly defined and broadly applied.” Yup. The concept is real—as George Orwell would say, “All animals are equal, but some animals are more equal than others.” But, labeling Yellow-bellied Sapsuckers and apex predators like wolves with the same title seems ludicrous. I will have to tinker with my sapsucker spiel before the next school group comes to learn about maple syrup. 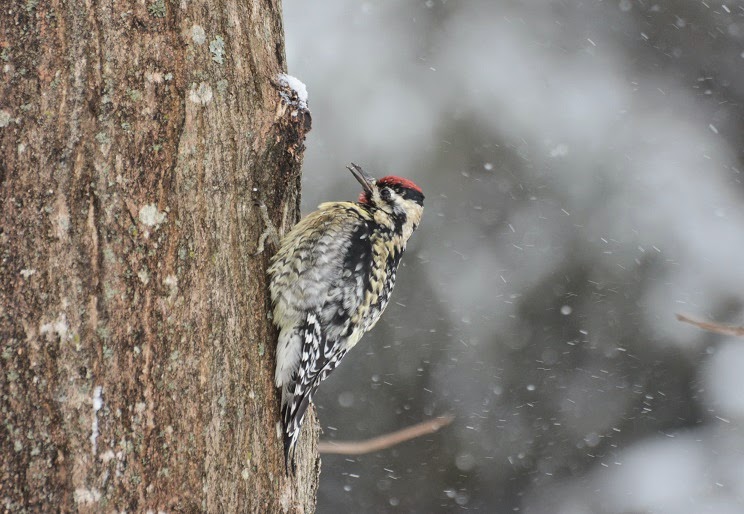 *I got thinking about sapsucker range and had to look it up. Basically, there’s a flip-flop around the tension zone in Wisconsin and mid-Michigan. Cincinnati is well within their winter range, but they don’t seem abundant here. 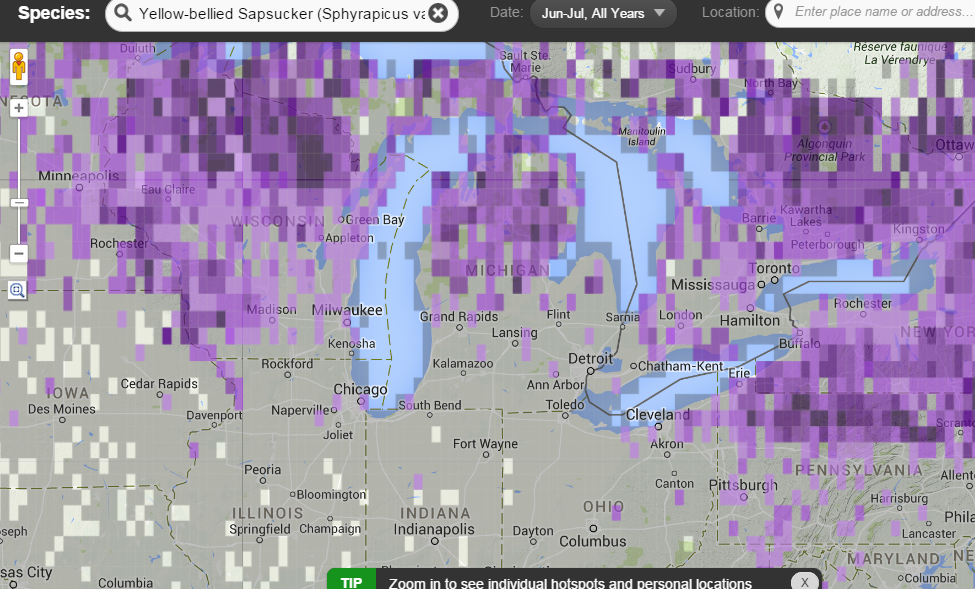 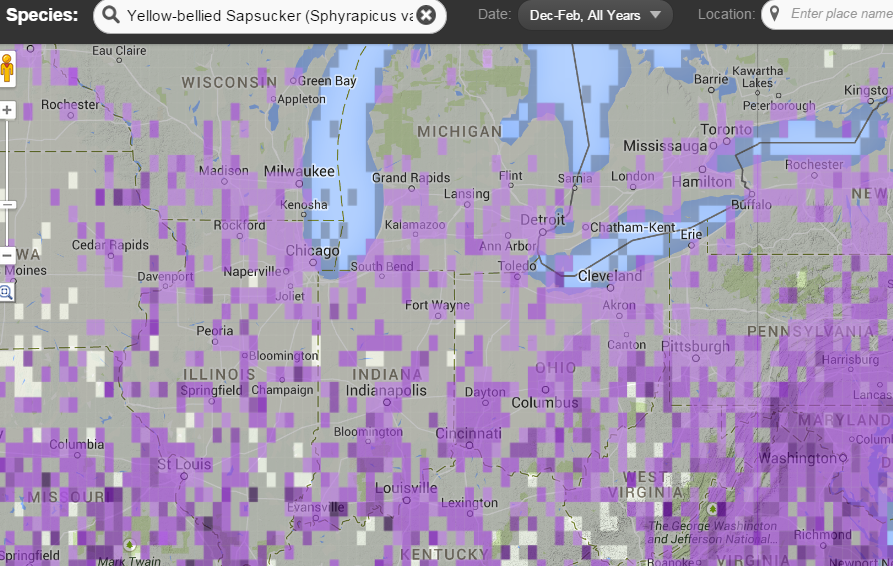 **Of course, there are exceptions. See Dorian Anderson's blog for an intriguing example.
Posted by Neil Gilbert at 1:18 PM 1 comment: 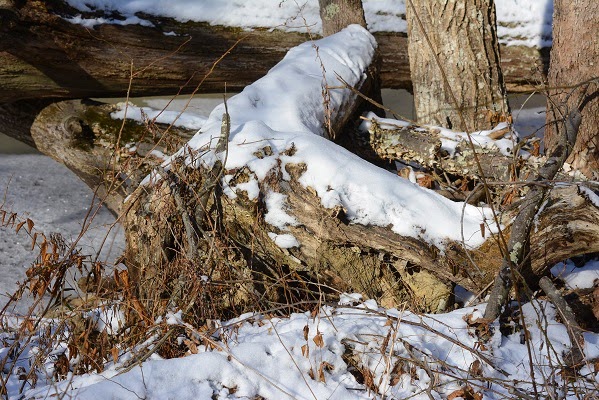 On a recent visit to the nature center's Long Branch Farm property, I encountered an avian insurgent, an insectivorous guerrilla that defies winter's frigid tantrums in the shelter of ravines and creek banks. That bird was a Winter Wren, a stubby little bird the color of dark chocolate. I imagine it must tussle with chipmunks and salamanders in the quasi-subterranean niches it inhabits. 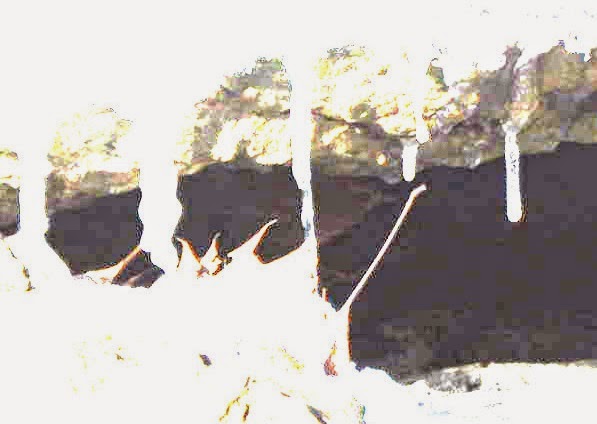 As this photo demonstrates, the Winter Wren is, under normal circumstances, undetectable as it lurks in dark crevasses. Fortunately for birders, the Winter Wren would perform well in the role of a crabby mother-in-law; at the first sign of conflict (i.e., pishing), it emerges from the catacombs and scolds voraciously. 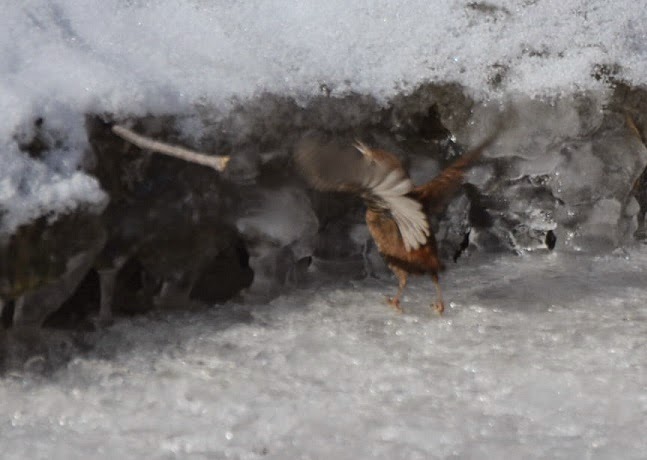 The bird skated around on the frozen creek before taking off for a more peaceful hovel. That illustrates another dimension of the Winter Wren personality; it never (i.e., never) sits still. 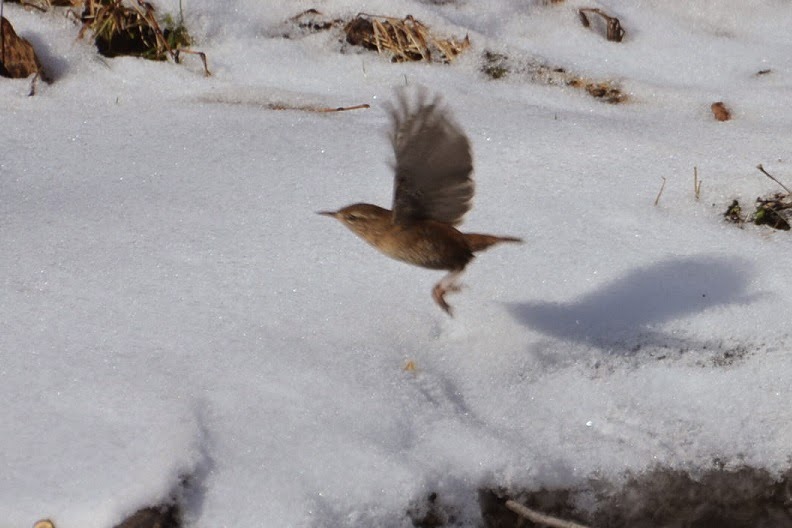 As a boy, I was perplexed about this wren's name. A much better name would be October Wren, I thought. For that was the month they always appeared in my backyard, burrowing through the woodpile and popping out in unexpected places. In Michigan, a winter Winter Wren is a prize, a bird worthy of a high five on a Christmas count. Here in southern Ohio, they are easier to find--walk a half mile of any creek, and you will kick one up.
Posted by Neil Gilbert at 10:14 PM No comments: 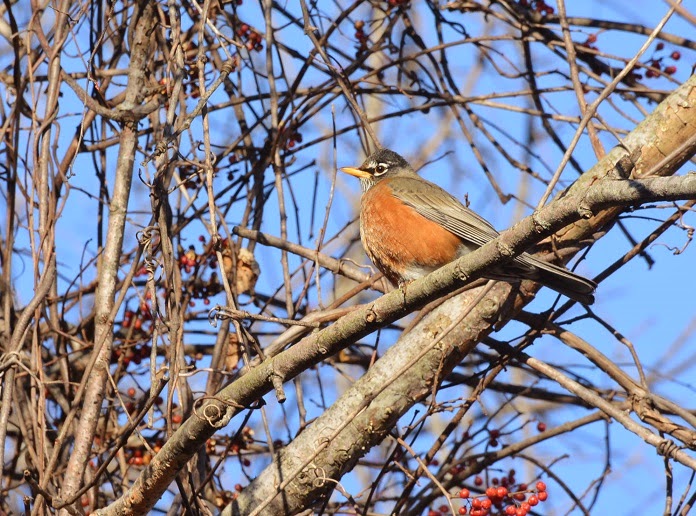 Life brings me to Cincinnati, Ohio, where for five months I am working as an education intern at the Cincinnati Nature Center. On any given day of work, you may find me leading school programs, hauling firewood, feeding snakes, working the center's front desk, tapping sugar maples, playing with preschoolers...you get the idea. It is a varied (and invariably fun) gig. What follows is an anthology of my photos from my first month of work. 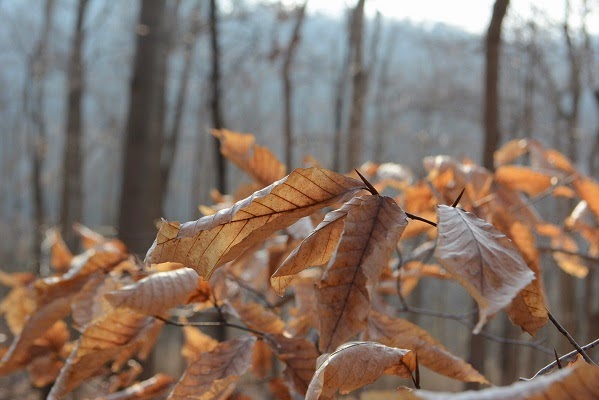 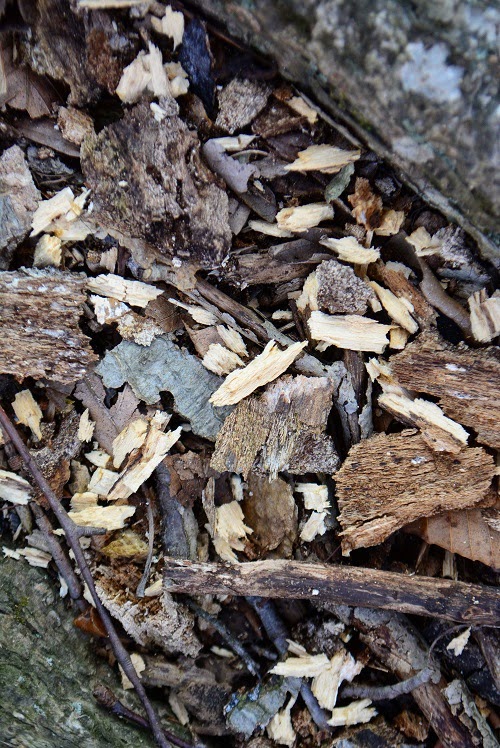 The business card of a Pileated Woodpecker 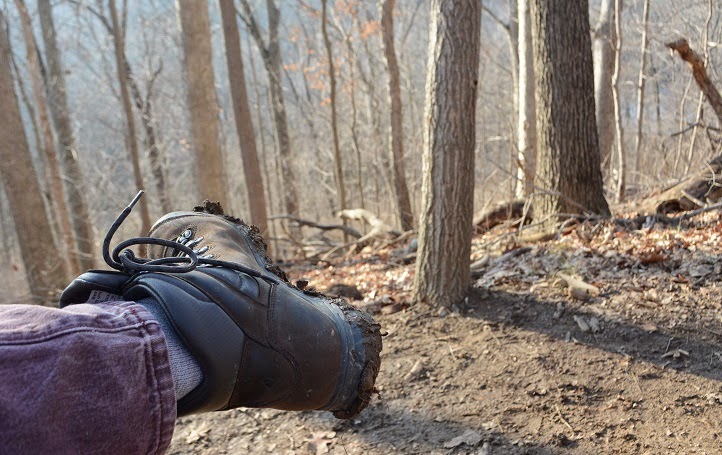 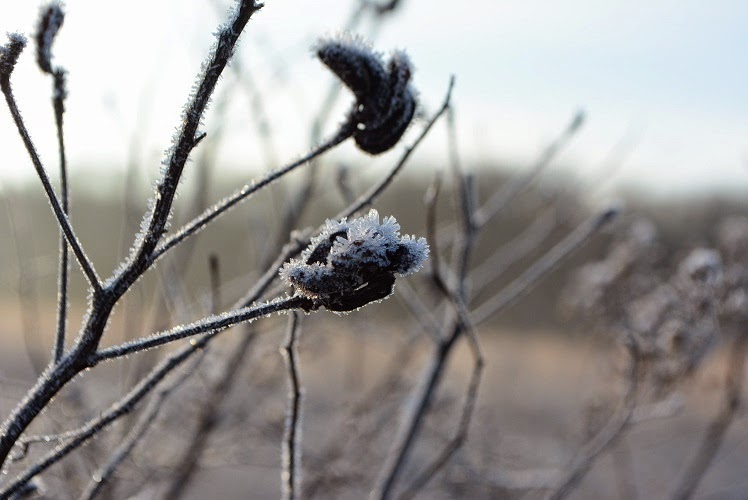 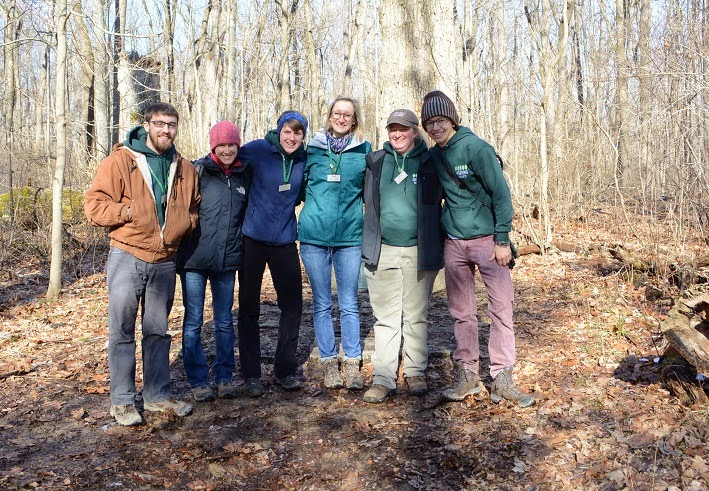 Cincinnati Nature Center's intern crew. I am honored to work with these talented folks. 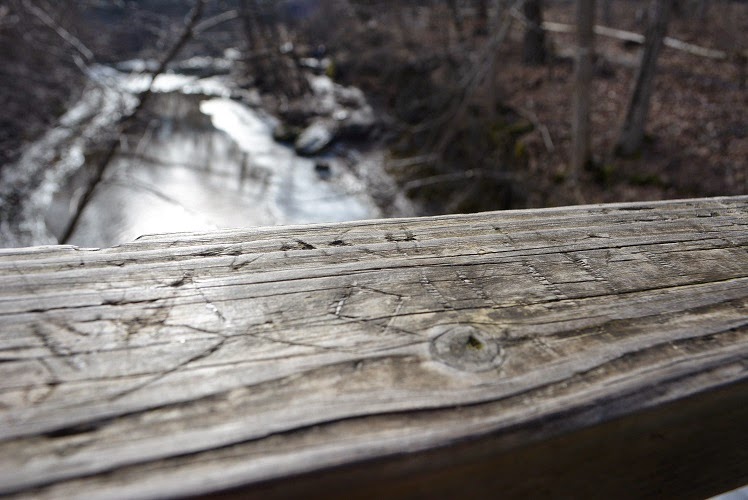 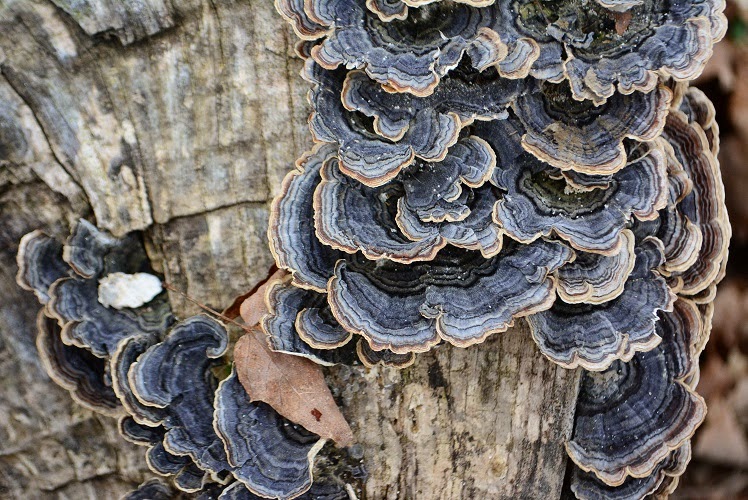 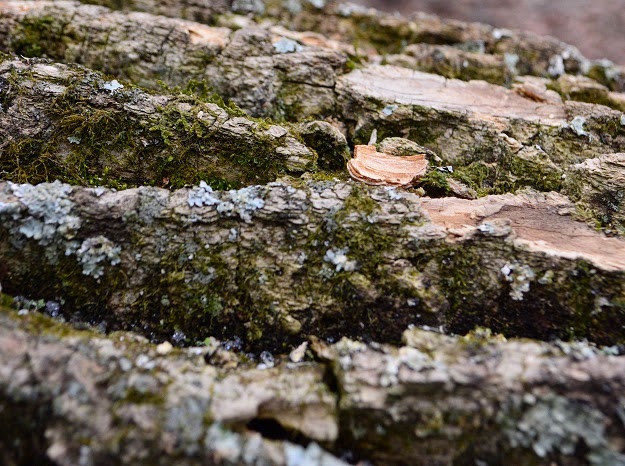 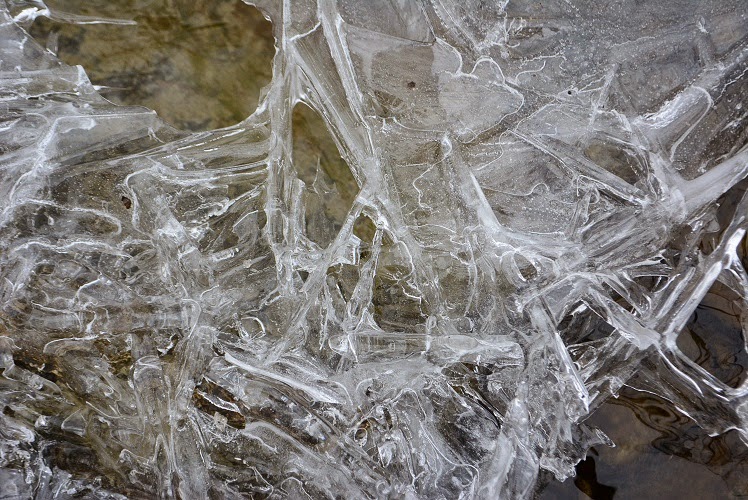 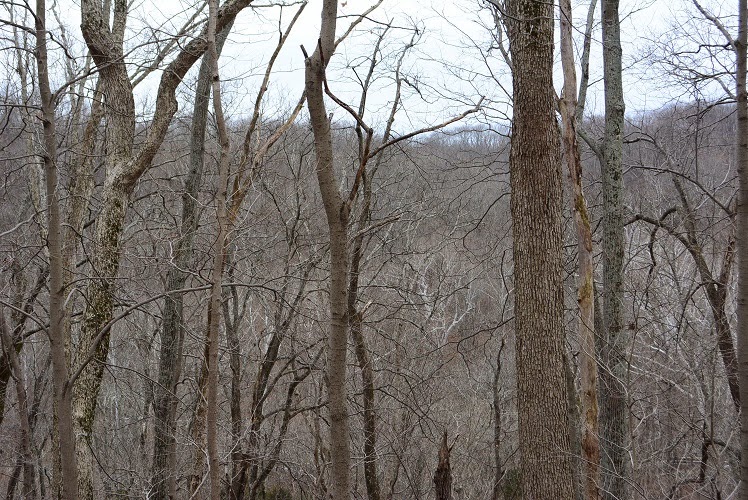 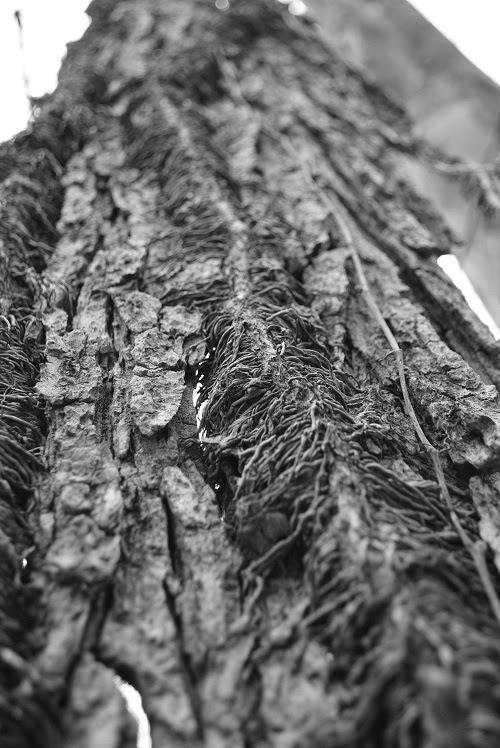 Hairy vine, no friend of mine. Poison Ivy (Toxicodendron radicans) 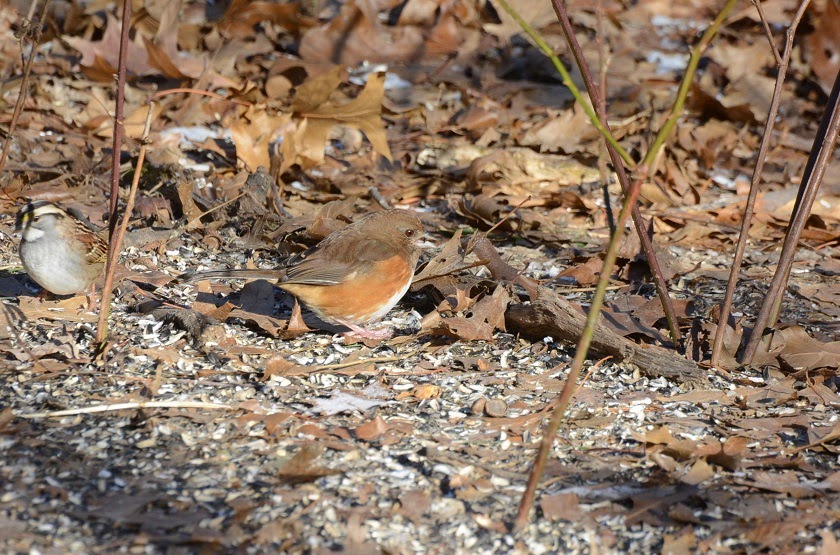 Adjusting to a new area's avifauna is always a fun challenge. In this case, the differences are subtle--but, don't be fooled, the 238 miles (yes, I checked on Google) that separate Cincinnati from Grand Rapids are sufficient to produce discrepancies in the bird life. A few species (e.g., Carolina Chickadee, Black Vulture) don't occur in Michigan (at least, not commonly). Others are much more common here in winter than they are in Michigan. This is true for Eastern Towhees--I can easily see eight in a day here, while a winter towhee in Michigan would be remarkable. There are plenty of other examples--Field Sparrow, Winter Wren, Hermit Thrush.

More to come. Hopefully.
Posted by Neil Gilbert at 9:41 PM No comments: