Christmas in the Canyon

“So, what are you going to do with Alison when she’s here next week?” my mom asked from across the table, sandwich poised halfway to her mouth.

Swallowing a mostly-chewed chunk of apple, I rattled off the traditional activities: seawatching, hiking, cooking. I paused, watching the sandwich approach my mom’s mouth, and then revealed, a touch reluctantly, my final plan: “I was also thinking about hiking up Silverado Canyon at two in the morning to look for owls.”

The sandwich stalled and took a nosedive to the plate. “Are you crazy?” my mom demanded. “Alison won’t want to do that.” I ducked my head and smirked.

The interior of the car was dim—nearly as dark as a deserted canyon in the wee hours of the morning, but light enough to spy Alison’s bags heaped in the trunk with a check of the rearview mirror. I could glimpse Alison herself in the passenger seat if I shifted my eyes to the right. Hitting my turn signal and glancing over my shoulder to change lanes, I breached the lapse in conversation with a proposal. “Now, this scheme has been condemned as foolhardy by my parents, but would you be interested in a middle-of-the-night hike up Silverado Canyon for owls?”

Alison did not hesitate. “What kind of question is that? Uh, YEAH! When are we going to do it?”

I thought for a moment, smiled, and said, “Christmas morning.”

That is why we are speeding down Santiago Canyon Road in the dark, the clock on the dash displaying 2:04. With every blink, my eyelids stick together like fingers covered in pine sap. Up ahead, a distant pair of headlights rises, momentarily disappears behind a knoll, reappears, swings around a bend, disappears behind another bend, and then assaults our eyes with brightness at point blank range as it roars by with a rush of wind. The night is restored to blackness, the only illumination coming from our headlights. Another car passes, igniting the blackness with its beams. “I don’t get it,” I complained, “where are all these people going so early on Christmas?”

The clock reads 2:28. With a turn of the key I kill the clock and the car. Everything is black, black as a womb. I give Alison’s hand a squeeze and climb into the night. The air is cool but lacks the anticipated chill. Everything is black. I shoulder my backpack, grasp my staff in one hand and Alison’s hand in the other, and we begin the march. Before we can even circumvent the gate, a pair of booming Great Horned Owls interrupts us. A good sign.

Night. Far from a sinister void of anything good, the blackness teems with life. The hooting owls accompany our footsteps; nearly every bush has its own rodent rustling in the leaf litter; and a few crickets, evidently on the brink of torpor, chirp sluggishly from the roadside. Human influence is nearly imperceptible. Traffic noise, houses, and lights are absent; indeed, the only sign of our species is the scuff of concrete beneath our boots.

The steep climb warms our bodies and we stop to strip off our outer layers, breathing heavily. There is no moon; the steep canyon walls on both sides and the sky lose their individual identities and blend together, the only difference between earth and firmament being the scattering of stars overhead. I tilt my head backward and give a garbled whistle, a pathetic rendition of a Western Screech-Owl’s call. Almost immediately one stammers an angry response from the oaks lining the stream below the road. I call back once or twice more and then we continue up the road, the owl still chirring and whistling to itself in the night.

“Screech six,” I announce, waving a hand in the general direction of a muffled whistle off to the right. “Let’s get up into saw-whet country!” We continue the upward hike with renewed vigor.

A conifer—a Douglas-fir—projects from an opposing hillside, its shape only barely distinguishable from the sky. The road, steeper now, is now longer paved. Our boots are much less bored—every step has the potential for pits, rocks, or uneven surfaces. Much more interesting than flat concrete. Screech-Owls and Great Horns have become commonplace—it is unusual for ten minutes to pass without hearing one or the other. A new voice is added to the owl equation, bring us to a halt, straining our ears. It is strange—a plaintive, continuous whistle, emanating from deep in the canyon. “Saw-whet?” Alison whispers, and, cupping my ears, I can differentiate the individual whistled toots. “Yeeup—let’s move up.”

Anyone who can whistle can imitate a saw-whet. I run my tongue over my lips, tilt my head back slightly, and broadcast a tooted challenge into the canyon. A screech—number ten or eleven, I’ve lost track—chirrs in response. Several minutes pass without a sound except for my whistling. Then, during a pause in my imitations, a timid tooting begins to our left, down the hill. It sounds distant, but it crescendos from a muffled, meek whistle to a loud, pugnacious one. The bird is close. I stab the foliage with the powerful beam of the flashlight, but the oaks, seemingly offended by this foreign light source, conceal everything with a dense screen of leaves. The tooting stops, a shadow darts overhead, and the tooting resumes from uphill. Finding the bird in the beam proves to be impossible, but it is privilege enough to hear it call at such close quarters. Several times, possibly in response to a second saw-whet tooting farther down the canyon, the bird gives a sharp, shouted k’eeOW, like Green Heron but more rubbery sounding.

Our pursuit of the saw-whet has distracted us from noticing the development of the day. The day, practically a zygote when we began the hike, is now a fetus, almost ready for birth. I shake my wrist to dislodge my watch from the sleeves—it’s five past six. “Time to descend,” I sigh wistfully.

The day is born. The sun isn’t up—it won’t be for some time, with these steep ridges and walls that frame the canyon—but the birds are. Towhees, thrashers, and juncos replace the owls. Wrentits whistle from every side. I glance slyly at Alison, who is smiling. “Hey!” I exclaim, suddenly remembering something. “Merry Christmas!”
Posted by Neil Gilbert at 2:43 PM 1 comment: 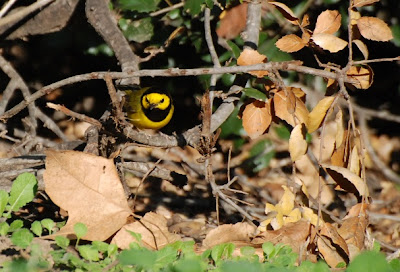 Few things sting as much as a text about a rare bird at one of your local patches. The sting isn't softened by several thousand miles, either. About a month ago, I seethed with rage when I received word about a male Hooded Warbler at Irvine Regional Park, a mere mile or so from my house. I consoled myself with that thought that, given the date, the bird would probably winter, allowing me to see it over Christmas break.

My prophecy came to pass. Twelve hours hadn't passed since my plane touched down in Orange County before I was admiring this golden knight of the underbrush. Despite its bright colors, the bird was surprisingly elusive--it took me a good hour to locate it, and it would have taken much longer had the bird not started calling. Its metallic chip is the easiest way find it.

The bird apparently wanders a bit, but its favorite area seems to be the low oak brush within the train track loop just east of the ampitheter and the large bronze statue of Mr. Irvine. Here's a map of the location. 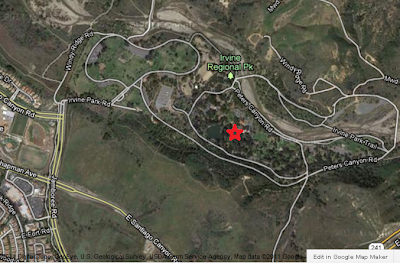 Not a bad way to begin break! I've followed it up with sightings of Masked Booby, White-throated Sparrow, Yellow-bellied Sapsucker, and Vermilion Flycatcher. Hopefully this trend will continue for the next two weeks of break.
Posted by Neil Gilbert at 9:30 PM No comments: 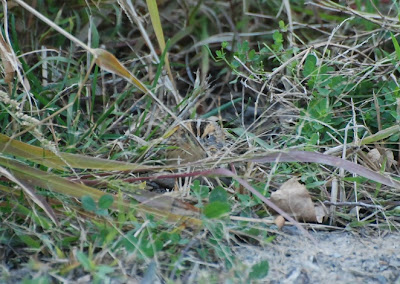 LeConte's Sparrow. In a patch of grass smaller than my dorm room. In downtown Chicago.

The sudden remembrance that I am (or, rather, was) the owner of this blog came as a surprise to me this evening; it had been several weeks since I had even thought about this outlet of boasting and bemoaning. Today being the last day of classes of the semester, I deemed it necessary to squeeze the traditional post complaining about the death of my birding life.

My acquisition of a car this year promised increased birding opportunities; if anything, I have birded less this semester than any previously. At times, an entire week would pass without even one lifting of the binoculars to the eyes, or even off their customary bedpost.

Still, the semester wasn't an entire waste. Problematic holes in my campus list, included Connecticut Warbler, Vesper Sparrow, Great Egret (!), Tundra Swan, Barred Owl, and Herring Gull (!!), lost the distinction of being holes. Occasional forays to the Caledonia Sewage Ponds between study sessions yielded Long-billed Dowitchers and Cackling Geese. I finally (i.e., finally) saw my first jaeger in Michigan, a Parasitic. On one fateful morning, a Brown Creeper landed on my jeans and creeped over my crotch. Sage Thrasher and LeConte's Sparrow in Chicago nearly convinced me that this wasteland is actually a fun place to bird.

Oh, and I got intimate with a Peregrine. Really intimate. Like, the four-foot sort of intimate. 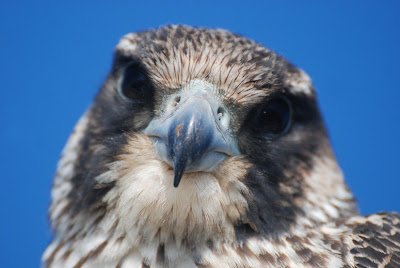 I would bore you with more chronicles of this birdless fall, but it's time to get to bed; I'm going birding tomorrow.
Posted by Neil Gilbert at 9:15 PM 1 comment: