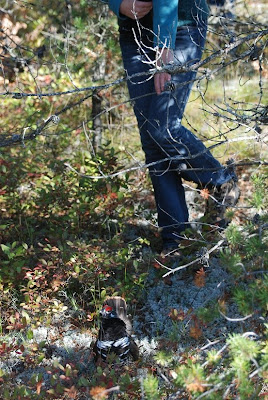 Meandering languidly along the deserted gravel road, I drew to a stop to survey my surroundings. Jack Pines, everywhere. Squat, gnarled conifers with scraggly needles and contorted limbs, these trees are far from stereotypical idyllic pine tree. In fact, they are ugly, and would hold little attraction to anyone other than maybe Charlie Brown. Actually, Spruce Grouse are fond of them too, and it was for them that my companions and I had traveled here, Vermilion Road in the Upper Peninsula.

My mid-road cogitations were disturbed by the sudden realization that my body really, really wanted me to urinate. The bladder being one authority figure I obey without question, I moved to the side of the road to submit to its will. I took one, two, three steps into the desiccated ferns, reached for the zipper, and—WHOOSH! I involuntarily recoiled from the ash-colored explosion from a low-hanging Jack Pine bough several feet away. Upon regaining control of both mind and bladder, I scanned the branches for the culprit of such a rude disturbance to my personal business. There it was, idly perched three feet up in a pine, red comb flared to maximum, tail fanned: a male Spruce Grouse. 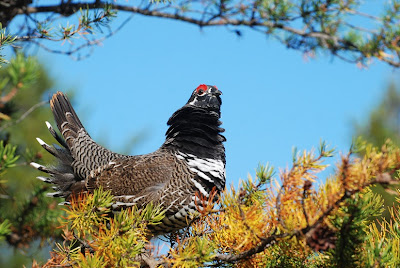 “GROOOUUSE!” I bellowed, hoping my comrades were within earshot. This particular suite of so-called friends derive no greater pleasure than beating and berating me, and the latest subject of my suffering had been my incapacity to walk a straight transect, leading to my chronic separation from the group.

The first to emerge from the ugly forest was Joseph, an abnormally tall, bearded pirate of a birder. He was quickly followed by his similarly tall brother Jonathan, and then by my girlfriend Alison. We converged on the grouse and ravaged it with our eyes.

The grouse, unimpressed, strutted like Santa Claus through the sphagnum, occasionally flaring his tail and fluffing out his feathers. His initial flightiness, perhaps caused by the imminent dropping of my pants, was deceptive; at one point, he proudly sauntered within an arm’s reach. He led us to two more Spruce Grouse nestled in a clump of notably average Jack Pines. We surrounded these boreal chickens, admiring and lusting after their intricately patterned feathers and plump bodies.

Unfortunately, the story lacks a dramatic finale. Two of the grouse sat motionless in pines, apparently disinterested in life, while Santa continued to strut his stuff in the ferns below. After ample observation, we heeded the call of pasties and migrated back in the direction of the car. But first, I had unfinished business to attend to. “Guys, I’ll catch up.”
Posted by Neil Gilbert at 10:45 PM 1 comment: