Eye on the Tiger 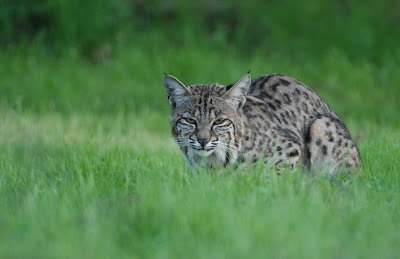 What does it take to distract an obsessed birder from birds?

Barring the predicted possibilities such as food, girlfriend, or studying, sometimes all it takes is a really good mammal.

Don't get me wrong. Not all mammals are equal. Lesser mammals, such as Fox Squirrels and Eastern Chipmunks, exist primarily to serve as targets for projectiles during bouts of acute boredom. Others, like Bobcats, demand complete attention.

It happened sort of like this. I was at Irvine Regional Park, blissfully enjoying a Red-breasted Sapsucker... 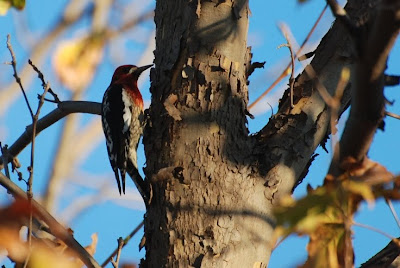 ...when, WHAM! I glanced aside and found myself under the cool, calculating gaze of a Bobcat bedded down in the grass. At first, I thought it might be sick--it sat, its eyes sagging shut, apparently uninterested in my presence. However, as I approached, the beast arose and sauntered away, throwing me a condescending glance over its shoulder.

The cat didn't care. It swaggered along the edge a thicket, occasionally stopping with its ears pricked, listening for prey. Then, without warning, it pounced, coming up with a juicy vole. It immediately devoured the unfortunate rodent. When I inspected the premises after the Bobcat had left, I found a slimy pile of Bobcat excrement as well as a stain of vole blood. 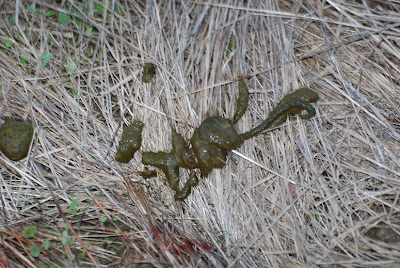 I should probably stop there.
Posted by Neil Gilbert at 11:18 PM 1 comment: 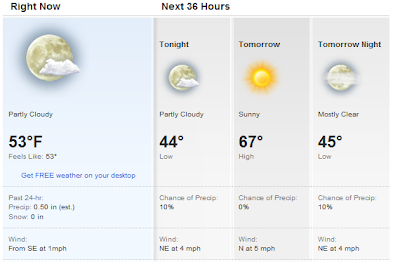 The answer to the question "Where are you from?" has become increasingly difficult for me to answer. At school, I pass myself off as a Californian; here in California, I claim to hail from Grand Rapids. Either way, my interrogator usually remarks on the climate of either location.

After a couple months of living in a more or less constant state of hypothermia, I was ready for a trip to sunny, balmy Orange County.

I curled my upper lip into a sneer and glared at the blurry sheets of water migrating down the fogged windshield. Lively rivulets of water flitted down the side window, and regiments of raindrops marched against the roof. With a weary hand I rubbed my eyes and rested my forehead against the wheel. Despair. Christmas Bird Counts are a classic tradition among birders, taking place regardless of weather conditions. But, I felt very little desire to wander in the rain all day without seeing any birds.

Come on, man up. If I stay out for an hour, I can eat half my peanut butter and jelly sandwich. I didn't matter that it was only seven in the morning.

I sighed, zipped up my rain jacket, and stepped into the rain, muttering choice homemade curses as the first droplets knifed down my neck. Trudging toward a bland-looking clump of brush, I pulled my hood up and huddled in its dry depths.

Staring into the tasteless bushes, I released a few half-hearted pish sequences through dripping lips. Nothing. I pished a bit more vigorously. A Spotted Towhee peeked out from its leafy lair and then dove back into cover.

Small potatoes. I extracted my notebook from my pocket and scrawled "SPTO I" in black ink across one of its soggy sheets. The ink sprouted veins and became illegible. The notebook returned to its snug home in my pocket, the zipper firmly yanked behind it. "May you be devoured by Turkey Vultures," I politely intoned as I turned to continue up the road.

Ahhh, Christmas Bird Counts. Romanticized during the rest of the year, many are, in reality, terrible ordeals. But this one was the worst I'd ever done. Rain relentlessly splattered every unprotected surface--face, binocular lenses, hands. A stiff breeze buffeted my body, finding every chink and crack in my protective layers. The rain and wind virtually eliminated bird activity. Even the normally ubiquitous Audubon's Warblers were difficult to turn up.

Fifteen minutes of singularly unpleasant birding brought me to the end of the road. I had little to show for it. I bowed my head. A stream of water coursed off my head and fell directly into one of the eye cups of my binoculars. That was the last straw.

Except it wasn't. I had to stay out; it was the Christmas Bird Count. And I wanted that sandwich. Just then I noticed a high-pitched squeak, the sort of squeak that Pacific-slope Flycatchers make. Scanning the dripping bushes, I spotted the culprit, matted and bedraggled, bouncing around the wet branches. It looked almost as pathetic as I felt. But, a good count bird.

Fifty minutes. Fifty-five. I had finally put in an hour. I stomped back to the car, soaked and disgruntled. I retreated to its relatively dry interior and tore in my sandwich. I even delved into my cache of grapes.

The rest of the day, as you can imagine, was toilsome.
Posted by Neil Gilbert at 10:27 PM 5 comments: 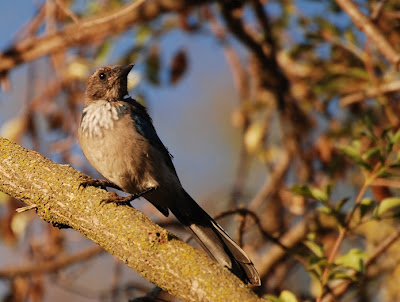 No, I don’t mean it in a malicious way. Hold your breath for as long as you can.

How do you feel now, thirty seconds, a minute later? Unless you’ve passed out, which I find highly unlikely (in fact, I doubt you held your breath at all, loser), you’re gasping for breath. When deprived of oxygen, you consume it at larger quantities when finally reunited with it.

Repression of birding brings similar results. All semester, my birding time was severely limited. During the closing weeks of the semester, however, it grew worse. Finals, papers, and presentations dominated my life. Oh, and the scarcity of birds and the sub-freezing temperatures did nothing to add to my motivation.

But that’s over. I’m back at home, free. Let the raw, primitive, unbridled birding begin!
Posted by Neil Gilbert at 12:07 AM 2 comments: