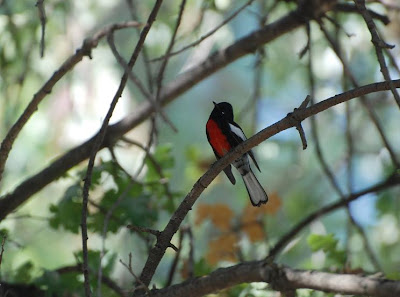 Not a Sprague's Pipit, but still a pretty nifty bird!

On Thursday I was surprised to read a posting about a Sprague's Pipit at Santa Fe Dam Recreation area in Irwindale. This is in Los Angeles County, but not too far away. I was a bit skeptical of the report until I viewed photos of the bird, and that convinced me that the bird was indeed a Sprague's Pipit. The bird was seen Friday, so I figured it would stick around. So, my mom and I drove up there this morning to look for it, making a slight detour to Pasadena to pick up John Garrett on the way.

Our first problem was actually finding the place. Last night, the printer ran out of ink and I was too tired to look up directions. After casting around a bit, we managed to find the place. The bird had been seen at a specific spot at the base of the dam, but when we walked over there, it was nowhere to be seen. We joined several other birders as they walked along the dam, searching for the bird. Other birders passed, their dejected faces clearly showing their lack of sightings before we even asked them if they had seen "the bird". We explored a little bit, finding several Rock Wrens and lots of sparrows. The small lake nearby had lots of birds, including a Ross's Goose (resident - showed up one day and never left), three Greater White-fronted Geese, Wood Duck, and Common Moorhen. As we wandered back towards the car, John and I bumped into a couple Plumbeous Vireos (singing!) and Lark Sparrows.

We abandoned the Sprague's Pipit and hit Bonelli Regional Park in San Dimas. This interesting park has hosted a Painted Redstart for the last several winters, the bird faithfully returning to the exact same tree. Once we arrived, it took us less than thirty seconds to find. It's nice to have a cooperative bird for once! Though it is not nearly as rare as a Sprague's Pipit in California, it certainly is more spectacular. I've seen them before in Arizona but never in California. See the photo at the top of the post!

A Red-breasted Sapsucker was also in the area, tapping the branches of a nearby pepper tree and shyly ducking away from the camera. Sapsuckers are always neat to see, and it was another new bird for my Los Angeles County list. 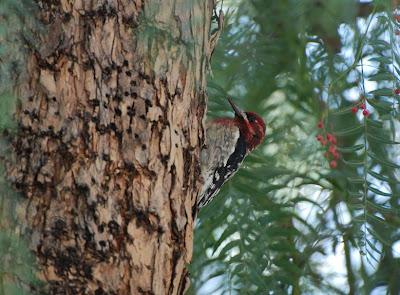 We had some time to spare after viewing the redstart, so we birded other areas of the park. The lake was liberally sprinkled with coots, Western, Clark's, Pied-billed, and Eared Grebes, American Wigeons, Ruddy Ducks, and others. John also tried to buy a block of ice from the ice cream man, which was quite hilarious. Just as we left the park, a nice juvenile Red-tailed Hawk circled above the parking lot as if to wish us farewell. 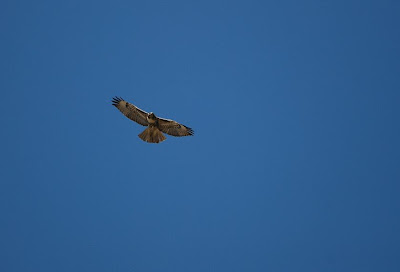 Even though we couldn't find the Sprague's Pipit, it was a nice morning of birding. I found nineteen new county birds, bringing my total for Los Angeles County to one seventy-three. That serves to indicate how little I go birding in Los Angeles County - I really should get up there and bird more.
Posted by Neil Gilbert at 11:54 PM

Did John successfully purchase ice? :-b

Thanks for the tip. The Painted Redstart was still present this morning, 2008-10-26, in the same tree. Birds that stick around are very convenient. :-)